P0023 - The Influence of Obesity on Complications of Cholelithiasis 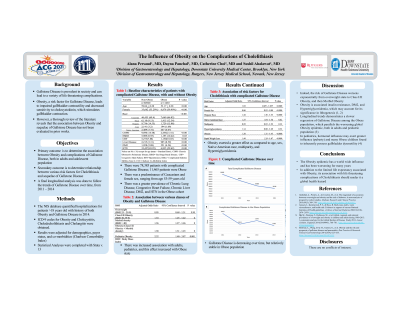 Introduction: Currently, metabolic syndrome is a worldwide epidemic and obesity has led to a host of medical problems in various organ systems. Among these, it is well known that obesity increases the risk of developing cholelithiasis. While previous studies have investigated this relationship, it would be interesting to examine the association between obesity and complications due to gallstone disease.

Methods: In this study, the 2014 National Inpatient Sample was used to collect data on patients with a primary diagnoses of cholecystitis, choledocholithiasis, or cholangitis. Cases were identified using the International Classification of Disease codes, 9th edition. Primary outcomes were the association of above conditions with obese state. Additional analyses compared other risk factors of cholelithiasis with obesity and separate longitudinal analyses from 2011-2014 were also completed. Multivariate logistic regression was conducted with Stata v.13 and adjusted for demographics, hospital characteristics, and comorbidities.

Results: There were 78,385 patients with complicated gallstone disease included, of which 11,465 patients had obesity. Demographics were fairly similar between obese and non-obese cohorts, but there was a larger proportion of chronic pulmonary disease, congestive heart failure, and hypertension in the obese cohort. Logistic regression demonstrated that obesity had an increased association with complications of cholelithiasis (aOR 1.38, p=0), most significant with choledocholithiasis (aOR 1.52, p=0). Interestingly, this relationship is stronger in children (aOR 2.32, p=0). Several factors are implicated in gallstone disease, but the risk associated with obesity is greater than age (aOR 1.1, p=0), sex (aOR 0.859, p=0), Native American race (aOR 1.27, p=0.02), and multiparity (aOR 0.22, p=0.12). Furthermore, secondary analyses conducted from 2011 to 2014 revealed overall decrease in gallstone disease over time, yet steady rates among the obese population. When stratified by disease process, choledocholithiasis in the obese exhibited an increasing trend over time.

Discussion: Obesity increases the possibility of developing life threatening complications of cholelithiasis and is among the most important risk factors. With steady rates of complicated gallstone disease among the obese population and significantly elevated risk of disease in obese children, management of this global health hazard should be made a top priority.