P0046 - A Rare Cause of Abdominal Pain: Pancreatic Lymphangioma 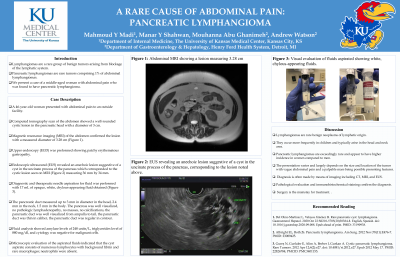 Case Description/Methods: A 46-year-old woman presented with abdominal pain to an outside facility. A contrast-enhanced computed tomography (CT) scan of the abdomen showed a 3- cm, well-rounded cystic lesion in the pancreatic head. The patient was referred to us for further evaluation. A contrast-enhanced magnetic resonance imaging (MRI) of the abdomen confirmed the lesion with a measured diameter of 3.28 cm (Figure 1, Panel A). Upper endoscopy was preformed showing patchy erythematous gastropathy. Endoscopic ultrasound (EUS) revealed an anechoic lesion suggestive of a cyst in the uncinate process of the pancreas which corresponded to the cystic lesion seen on MRI (Figure 1, Panel B) measuring 36 mm by 34 mm. Diagnostic and therapeutic needle aspiration for fluid was performed with 17 mL of opaque, white, chylous-appearing fluid was obtained (Figure 1, Panel C). The pancreatic duct was regular in contour and was non dilated. The pancreas was well visualized, no pathologic lymphadenopathy, masses, or calcifications. Fluid analysis showed an amylase level of 248 units/L, a triglycerides level of 880 mg/dl, and cytology was negative for malignant cells. Microscopic evaluation of the aspirated fluids indicated that the cyst aspirate consists of numerous lymphocytes with background fibrin and rare macrophages; neutrophils are absent. The aspirate findings would be compatible with lymphangioma.

Discussion: Lymphangiomas are rare benign neoplasms of lymphatic origin. They occur more frequently in children and typically arise in the head and neck area. Pancreatic lymphangiomas are exceedingly rare and appear to have higher incidence in women compared to men. The presentation varies and largely depends on the size and location of the tumor with vague abdominal pain and a palpable mass being possible presenting features. Diagnosis is often made by means of imaging including CT, MRI, and EUS. Pathological evaluation and immunohistochemical staining confirm the diagnosis. Surgery is the mainstay for treatment, if needed. 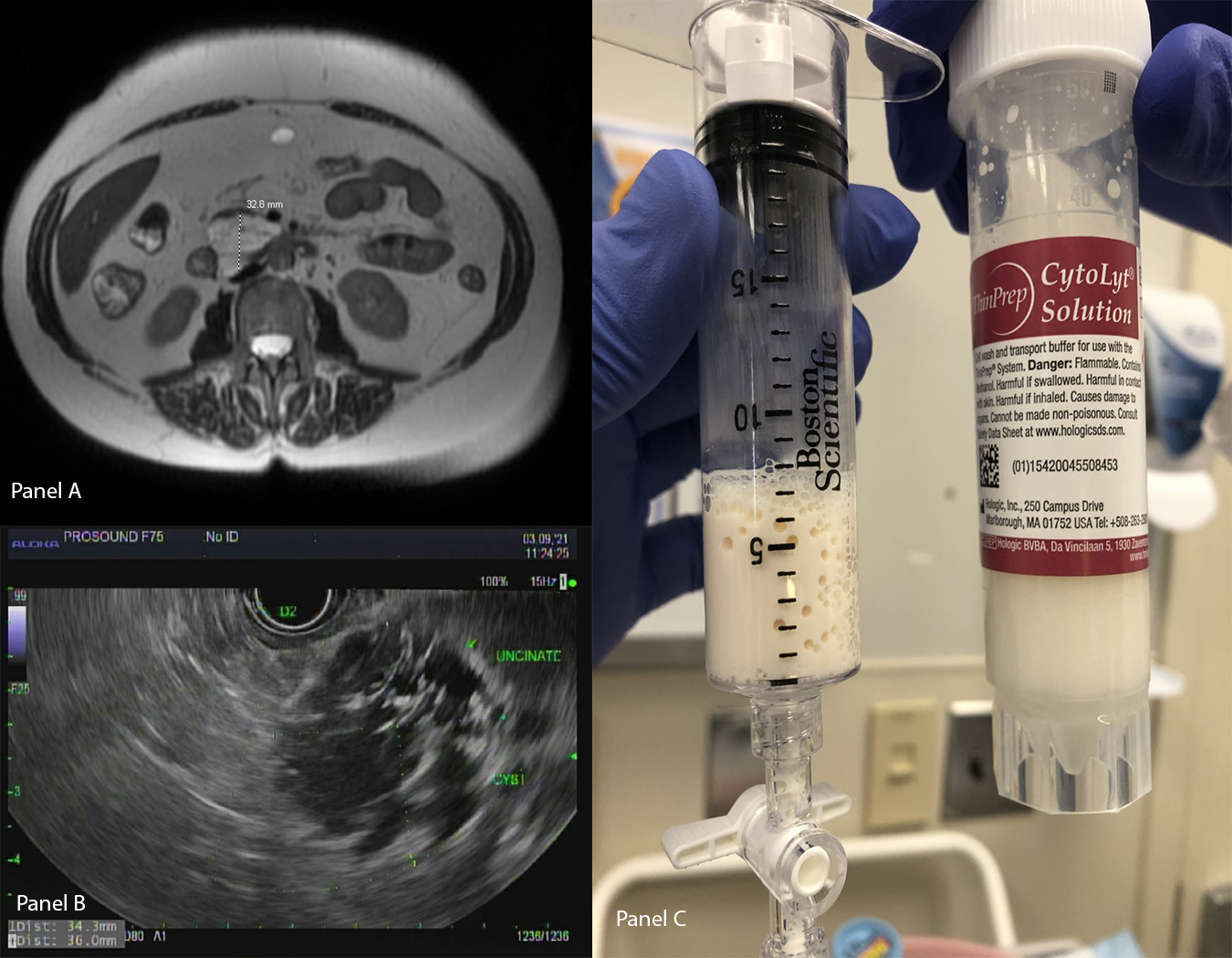