P0144 - The Role of Dysbiosis in Neurological Disorders 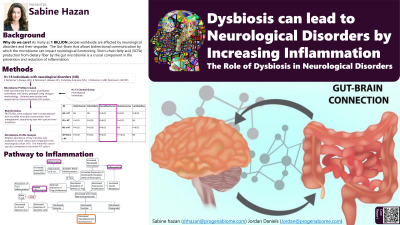 Introduction: The gut brain axis is a system of bi-directional communication. When the delicate balance of the microbiome is disrupted, the resulting dysbiosis can be a factor in the development of neurological disorders, including Alzheimer’s Disease (AD), Parkinson’s Disease (PK), and Multiple Sclerosis (MS). One major player in the gut brain axis are short-chain fatty acids (SCFA), particularly butyrate, acetate, and propionate. These are produced by key players in the gut microbiome via breakdown of dietary fiber. In this study, we sought to identify a characteristic microbial “signature” of neurological disorders and identify potential therapeutic targets.

Methods: Microbiome profiles of 18 individuals with neurological disorders (3 AD, 8 PK, 3 MS, and 1 AD/PK) were compared to profiles of 13 neurotypical individuals. To obtain these microbiome profiles, DNA was extracted from the fecal samples. DNA was then quantitated and normalized for downstream library fabrication utilizing shotgun methodology. Prepared and indexed libraries were subsequently pooled and sequenced on the Illumina NextSeq 550 System. Sample FASTQ files were analyzed with a computational tool profiling the microbial communities from metagenomic sequencing data with species level resolution. Finally, individual microbiome profiles were analyzed for relative abundance. Each condition was compared to the neurotypical (NT) cohort, and then the entire neurological disorder cohort to the NT cohort. The study was approved by Ethical & Independent review and is listed as NCT04031469.

Results: The relative abundance of Faecalibacterium was found to be significant across all groups tested (P< 0.001 for the entire neurological cohort). Additionally, Akkermansia, Clostridium, and Ruminococcus were significant in three of four analyses. Table 1 outlines which analyses were significant for each group. Figure one illustrates the hypothesized role of Faecalicbacterium and Ruminococcus in inflammation along multiple pathways due to SCFA depletion.

Discussion: Gut microbes that produce SCFA are critical to the health and wellbeing of their host. Depletion of SCFA can have myriad detrimental impacts, including inflammation, which can in turn lead to neurological disorders such as AD, PK, and MS. Low relative abundance of these microbes could be a culprit in neurological disease pathogenesis, or merely a symptom of disease progression. These findings could lead to novel therapeutic modalities via microbiome manipulation. 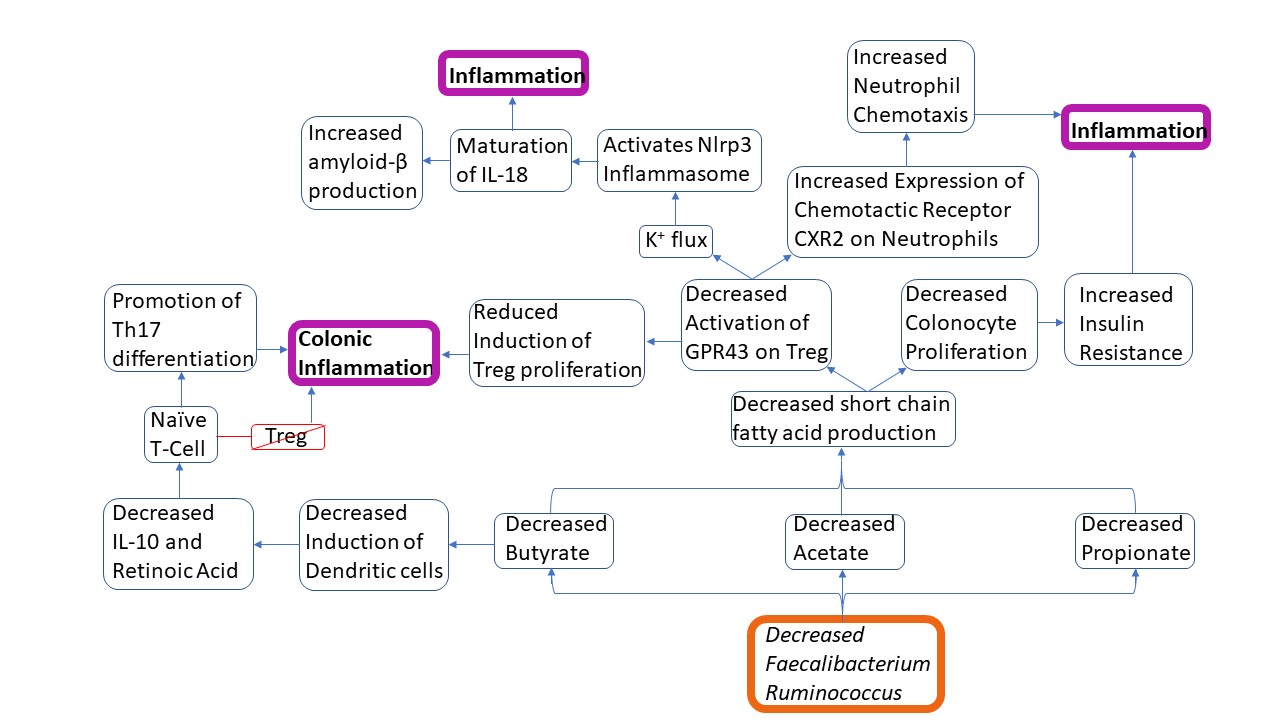