P0157 - A Case of Cytomegalovirus Proctocolitis in an Immunocompetent Patient 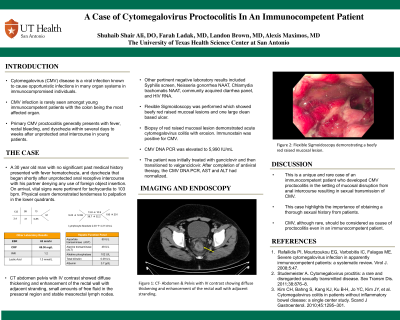 Case Description/Methods: A thirty-year-old male with no significant past medical history presented with fever, hematochezia, and dyschezia that began shortly after unprotected anal receptive intercourse with his partner. The patient denied any foreign object insertion. Due to persistent symptoms and a subjective fever, patient sought further medical care and was admitted to the hospital for further evaluation. On arrival, vital signs were pertinent for tachycardia to 103 bpm. The patient’s work up included a computed tomography imaging that was concerning for proctocolitis. A sexually transmitted infection screen, which included gonorrhea, chlamydia, and syphilis serologies were negative. Alanine and Aspartate Aminotransferases (AST and ALT) were elevated at 50 and 48 U/L, respectively. The patient underwent a flexible sigmoidoscopy which showed beefy, raised, erythematous lesions extending to 20 cm from the anal verge. A large coalescing clean-based ulcer was also observed in the distal rectum. Biopsies obtained showed findings indicative of CMV. CMV DNA PCR was elevated to 5,990 IU/mL. HIV serologies, including HIV RNA, were negative. The patient was initially treated with ganciclovir and then transitioned to valganciclovir. The patient’s symptoms improved with treatment and was discharged with follow-up with Gastroenterology and Infectious Disease. After completion of anti-viral therapy, his CMV DNA PCR, AST, and ALT normalized.