P0172 - A Case of Collagenous Colitis Masquerading as Crohn’s Disease 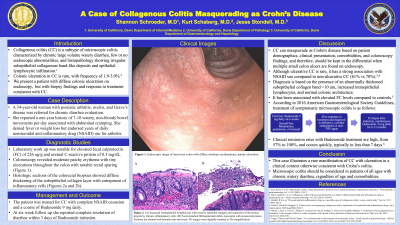 Introduction: Collagenous colitis (CC) is a subtype of microscopic colitis characterized by chronic large volume watery diarrhea, few or no endoscopic abnormalities, and histopathology showing irregular subepithelial collagenous band-like deposits and epithelial lymphocytic infiltration. Colonic ulceration in CC is rare, with frequency between 1.9-3.0%. We present a patient with diffuse colonic ulceration on endoscopy, but with biopsy findings and response to treatment consistent with CC.

Case Description/Methods: A 34-year-old woman with psoriatic arthritis, uveitis, and Grave’s disease was referred for colonoscopy for chronic diarrhea evaluation. She reported a one-year history of 7-10 watery, non-bloody bowel movements per day associated with abdominal cramping. She denied fever or weight loss but endorsed many years of daily non-steroidal anti-inflammatory drug (NSAID) use to manage arthritic pain. Prior work up was notable for fecal calprotectin (FC) of 226 ug/g and normal C-reactive protein of 0.3 mg/dL. Colonoscopy revealed moderate patchy erythema with tiny ulcerations throughout the colon with notable rectal sparing (Figure 1). The appearance of the ulcerations combined with the patient's history of uveitis and psoriatic arthritis suggested a diagnosis of Crohn’s colitis. However, biopsies revealed dramatic and diffuse thickening of the subepithelial collagen layer with entrapment of inflammatory cells and capillaries, and an accompanying moderate increase in intraepithelial lymphocytes. The patient was treated for CC with complete NSAID cessation and a course of Budesonide 9 mg daily. At six week follow up she reported complete resolution of diarrhea within 3 days of Budesonide initiation.

Discussion: Although ulcerative CC is rare, it has a strong association with NSAID use compared to non-ulcerative CC (61% vs. 78%). Clinical remission rates with Budesonide treatment are high, anywhere from 57% to 100%. Clinical remission occurs quickly, typically in less than 7 days, as was the case with our patient. Given her comorbidities and elevated FC, the possibility of CC and inflammatory bowel disease (IBD) co-occurrence was considered, However, multiple studies have shown elevated FC levels in microscopic colitis compared to controls. Furthermore, CC is usually followed by development of IBD, or years after IBD treatment with tumor necrosis factor-alpha inhibitors. This case illustrates a rare manifestation of CC with ulceration in a clinical context otherwise consistent with Crohn’s colitis. 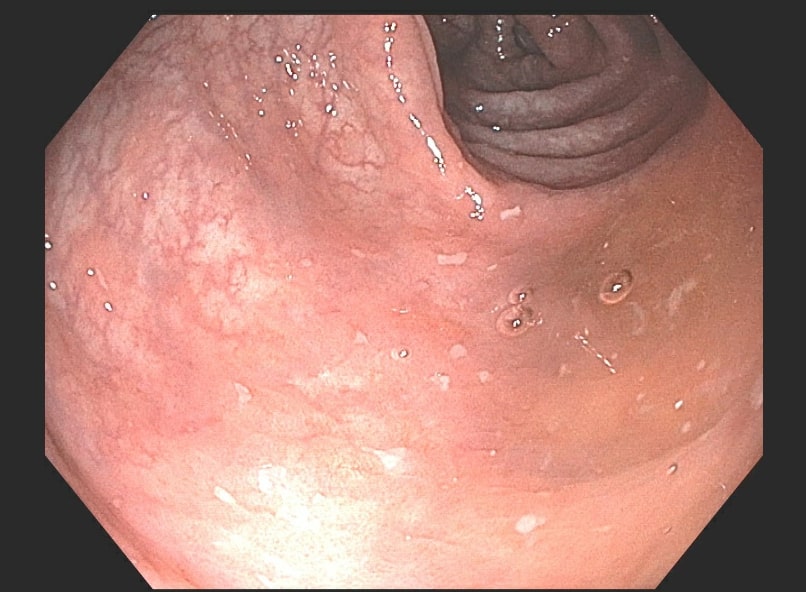