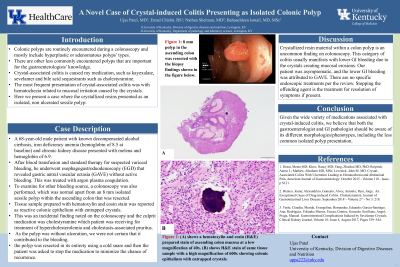 Introduction: Colonic polyps are routinely encountered during a colonoscopy and are usually hyperplastic or adenomatous. other less common polyps can be encountered and it is important for the gastroenterologists to be aware of. Crystal-associated colitis can be seen with medications such as kayexalate, sevelamer and bile acid sequestrants. It typically manifests as mucosal ulceration with lower GI bleeding. Here we present a case where the crystallized resins presented as an isolated, non ulcerated sessile polyp.

Case Description/Methods: A 68-year-old male patient with known decompensated alcohol cirrhosis, iron deficiency anemia (hemoglobin of 8.5 at baseline) and chronic kidney disease presented with melena and hemoglobin of 6.9. He received a blood transfusion and was started on standard therapy for variceal bleeding. The esophagogastroduodenoscopy (EGD) revealed gastric antral vascular ectasia (GAVE) without active bleeding and were treated with argon plasma coagulation. Colonoscopy was normal apart from an 8 mm isolated sessile polyp within the ascending colon that was resected. Routine hematoxylin and eosin stain was reported as reactive colonic epithelium with entrapped crystals. This was an incidental finding noted on the colonoscopy and the culprit medication was cholestyramine which patient was receiving for treatment of hypercholesterolemia and cholestasis-associated pruritus. As the polyp was without ulceration, we do not believe that it contributed to the bleeding. He was treated by stopping the medication to promote mucosal healing and the polyp was resected in its entirety.

Discussion: Crystallized resin material within a colon polyp is an uncommon finding on colonoscopy. It usually manifests with lower GI bleeding due to the crystals creating mucosal erosions. Our patient was asymptomatic, and the lower GI bleeding was attributed to GAVE. Given the wide variety of medications associated with crystal-induced colitis, we believe that both the gastroenterologist and GI pathologist should be aware of its different morphologies/phenotypes, including the less common isolated polyp presentation.