P0244 - An Unexpected Cause of Hematochezia 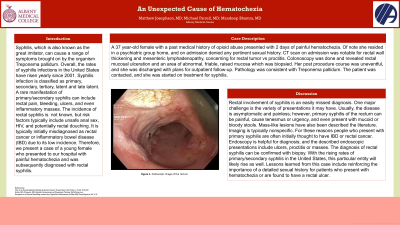 Introduction: Syphilis also known as the great imitator is a range of symptoms brought on by the organism Treponema pallidum. Overall, the rates of syphilis infections in the United States have risen yearly since 2001. Syphilis infection is classified as primary, secondary, tertiary, latent and late latent. A rare manifestation of primary/secondary syphilis can include rectal pain, bleeding, ulcers, and even inflammatory masses. The incidence of rectal syphilis is unknown, but risk factors typically include unsafe anal sex, HIV, and potentially rectal douching. It is typically initially misdiagnosed as rectal cancer or IBD due to its low incidence. Therefore, we present a case of a young female who presented with painful hematochezia and was subsequently diagnosed with rectal syphilis.

Case Description/Methods: A 37 year old female with a past medical history of opioid abuse who presented for 2 days of painful hematochezia. Of note she resided in a psychiatric group home, and on admission denied any pertinent sexual history. CT scan on admission was notable for rectal wall thickening and mesenteric lymphadenopathy, concerning for rectal tumor vs proctitis. Colonoscopy was done and revealed rectal mucosal ulceration and an area of abnormal, friable, raised mucosa which was biopsied. Her post procedure course was uneventful, and she was discharged with plans for outpatient follow-up. Pathology was consistent with Treponema pallidum. The patient was contacted, and the was started on treatment for syphilis.

Discussion: Rectal involvement of syphilis is an easily missed diagnosis. One major challenge is the variety of presentations it may have. Usually, the disease is asymptomatic and painless; however, primary syphilis of the rectum can be painful, cause tenesmus or urgency, and even present with mucoid or bloody stools. Mass like lesions have also been described the literature. Imaging is typically nonspecific. For these reasons people who present with primary syphilis are often initially thought to have IBD or rectal cancer. Endoscopy is helpful for diagnosis; and the described endoscopic presentations include ulcers, proctitis or masses. The diagnosis of rectal syphilis can be confirmed with biopsy. With the rising rates of primary/secondary syphilis in the United States, this particular entity will likely rise as well. Lessons learned from this case include reinforcing the importance of a detailed sexual history for patients who present with hematochezia or are found to have a rectal ulcer. 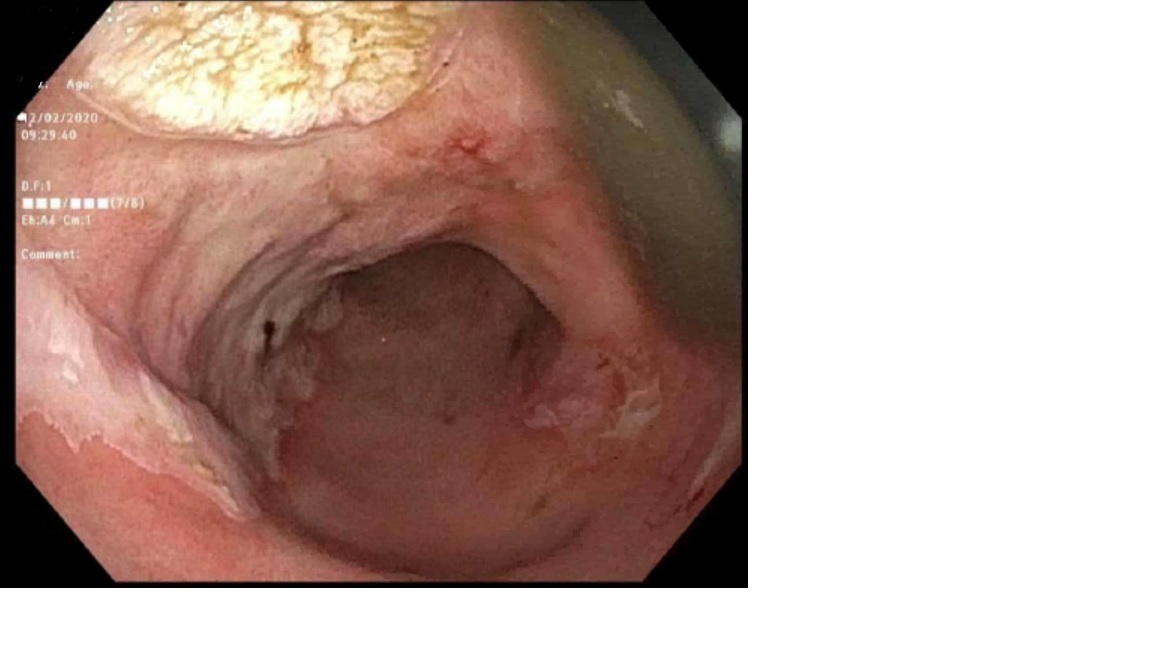 Figure: Endoscopic image of the rectum