P0373 - An Unusual Cause of Dysphagia: Large Pharyngoesophageal Erosion from Anterior Spine Hardware 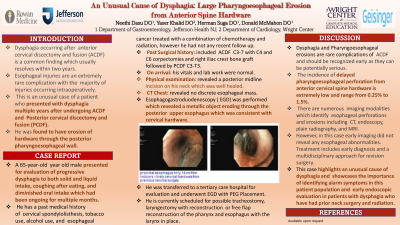 Introduction: Dysphagia occurring after anterior cervical discectomy and fusion (ACDF) is a common finding which usually resolves within two years. Esophageal injuries are an extremely rare complication with the majority of injuries occurring intraoperatively. This is an unusual case of a patient who presented with dysphagia multiple years after undergoing ACDF and Posterior cervical discectomy and fusion (PCDF). He was found to have erosion of hardware through the posterior pharyngoesophageal wall.

Case Description/Methods: A 65-year-old-year-old male presented for evaluation of progressive dysphagia to both solid and liquid intake, coughing after eating, and diminished oral intake which had been ongoing for multiple months. He has a past medical history of cervical spondylolisthesis, tobacco use, alcohol use, and esophageal cancer treated with a combination of chemotherapy and radiation, however, he had no recent follow-up. Past Surgical history included ACDF C3-7 with C4 and C6 corpectomies and right iliac crest bone graft followed by PCDF C3-T3. On arrival, his vitals and lab work was within normal limits. Physical examination revealed a well-healed posterior midline incision on his neck. CT Chest revealed no discrete esophageal mass. The patient underwent Esophagogastroduodenoscopy ( EGD) which revealed a metallic object eroding through the posterior upper esophagus which was consistent with cervical hardware. He was transferred to a tertiary care hospital for evaluation and underwent EGD with PEG Placement. He is currently scheduled for possible tracheostomy, laryngectomy with reconstruction, or free flap reconstruction of the pharynx and esophagus with the larynx in place.

Discussion: Dysphagia and Pharyngoesophageal erosions are rare complications of ACDF and should be recognized early as they can be potentially serious. The incidence of delayed pharyngoesophageal perforation from anterior cervical spine hardware is extremely low and ranges from 0.25% to 1.5% There are numerous imaging modalities that identify esophageal perforations and erosions, including CT, endoscopy, plain radiography, and MRI. However, in this case, imaging did not reveal any esophageal abnormalities. Treatment includes early diagnosis and a multidisciplinary approach for revision surgery. This case highlights an unusual cause of dysphagia and showcases the importance of identifying alarm symptoms in this patient population and early endoscopic evaluation in patients with dysphagia who have had prior neck surgery and radiation.

Figure: Cervical Hardware noted around 14 cm from incisors in the proximal esophagus.