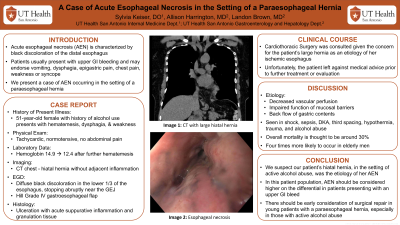 Introduction: Acute esophageal necrosis (AEN), also known as black esophagus, is a rare disorder characterized by black discoloration of the distal esophagus seen on esophagogastroduodenoscopy (EGD). Patients usually present with upper gastrointestinal bleeding and may endorse vomiting, dysphagia, epigastric pain, chest pain, weakness or syncope. We present a case of AEN occurring in the setting of a paraesophageal hernia.

Case Description/Methods: A 51-year-old female with a history of alcohol use disorder presented with five days of hematemesis, intermittent dysphagia, and weakness. She reported an initial incident of retching, followed by subsequent episodes of hematemesis. On exam she was tachycardic, normotensive, and without abdominal pain. Initial lab results revealed a hemoglobin of 14.9 g/dL which decreased to 12.4 g/dL. An abdominal CT scan showed a paraesophageal hernia without adjacent inflammatory changes. EGD revealed diffuse black discoloration in the lower third of the esophagus, stopping abruptly near the gastroesophageal junction. A gastroesophageal flap was visualized and classified as Hill Grade IV. There was no evidence of bleeding or ulceration in the stomach or duodenum. Histology from the esophageal biopsies demonstrated ulceration with acute suppurative inflammation and granulation tissue. Cardiothoracic Surgery was consulted given the concern for the patient's large hernia as an etiology of her ischemic esophagus. Unfortunately, the patient left against medical advice prior to further treatment or evaluation.

Discussion: The etiology of AEN is thought to be secondary to decreased vascular perfusion, impaired function of the mucosal barriers, and increased back flow of gastric contents causing injury that overwhelms the vulnerable esophageal mucosa. It has been seen in the setting of shock, sepsis, diabetic ketoacidosis, severe third spacing, hypothermia, and trauma. The overall mortality is thought to be around 30%. AEN is four times more likely to occur in elderly men. It has also been seen in a younger patient population with active alcohol abuse, as seen in our patient. We suspect our patient’s paraesophageal hernia, in the setting of active alcohol abuse, was the etiology of her AEN. In this patient population, AEN should be considered higher on the differential in patients presenting with an upper GI bleed. There should be early consideration of surgical repair in young patients with a paraesophageal hernia, especially in those patients with active alcohol abuse.

Figure: a) Coronal CT Chest demonstrating large hiatal hernia
b) Endoscopy image of the lower third of the esophagus with necrosis