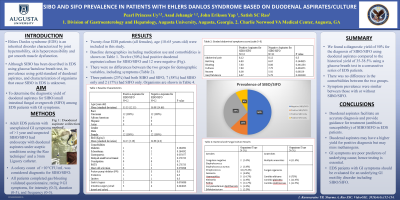 Methods: Adult EDS patients referred to our tertiary care center from January 2012 to December 2020 with unexplained GI symptoms of more than 1 year and suspected to have SIBO/SIFO underwent endoscopy with duodenal aspirates with aerobic, anaerobic, and fungal cultures obtained under aseptic conditions using the Rao technique and a 3mm Liguory catheter (Videogie;https://doi.org/10.1016/j.vgie.2020. 11.008). A colony count >103 CFU/mL was considered diagnostic for SIBO/SIFO. The diagnostic yield and microbial characteristics were assessed.

Results: Twenty-four patients (all females) were included in this study, of whom 12 (50%) had positive duodenal aspirates culture for SIBO/SIFO. Three patients (25%) had both SIBO and SIFO, 7 (58%) had SIBO only and 2 (17%) had SIFO only. The predominant organisms cultured were Streptococcus, Haemophilus, Rothia, Neisseria, multiple anaerobes, and Candida albicans. Among the positive aspirates group, abdominal pain, bloating, fullness, nausea, and flatulence were commonly reported but their prevalence were similar to the negative aspirates group. There was no significant difference in the medical comorbidities (gastroparesis, delayed small bowel transit, constipation), GI surgeries, use of PPI and opiates between the positive and negative aspirates group.

Discussion: We found a diagnostic yield of 50% using duodenal aspirates for the diagnosis of SIBO/SIFO compared to the historical yield of 35-38.5% using a glucose breath test. There was no difference in the comorbidities between the two groups and symptoms were poor predictors for the diagnosis of SIBO/SIFO. Duodenal aspirates may facilitate an accurate diagnosis and treatment of SIBO/SIFO in EDS patients and provide guidance for treatments such as antibiotic susceptibility. EDS patients with GI symptoms should be evaluated for an underlying GI motility disorder including SIBO/SIFO.

Table: Title: Demographic Characteristics of the Study Population and Microbial Culture Results of the Duodenal Aspirates