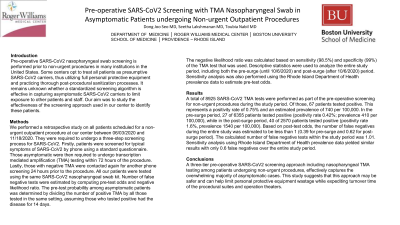 Introduction: Pre-operative SARS-CoV2 nasopharyngeal swab screening is performed prior to non-urgent procedures in many institutions in the United States. It remains unknown whether a standardized screening algorithm is effective in capturing asymptomatic SARS-CoV2 carriers to limit exposure to other patients and staff. Our aim was to study the effectiveness of the screening approach used in our center to identify these patients.

Methods: We performed a retrospective study at our center between 06/03/2020 and 11/18/2020.Firstly, patients were screened for typical symptoms of SARS-CoV2 by phone using a standard questionnaire. Those asymptomatic were then required to undergo transcription mediated amplification (TMA) testing within 72 hours of the procedure. Lastly, those with negative TMA were contacted again for another phone screening 24 hours prior to the procedure. All our patients were tested using the same SARS-CoV2 nasopharyngeal swab kit. Number of false negative tests were estimated by computing pre-test odds and negative likelihood ratio. The pre-test probability among asymptomatic patients was determined by dividing the number of positive TMA by all those tested in the same setting, assuming those who tested positive had the disease for 14 days. The negative likelihood ratio was calculated based on sensitivity (98.5%) and specificity (99%) of the TMA test that was used. Descriptive statistics were used to analyze the entire study period, including both the pre-surge (until 10/6/2020) and post-surge (after 10/6/2020) period.