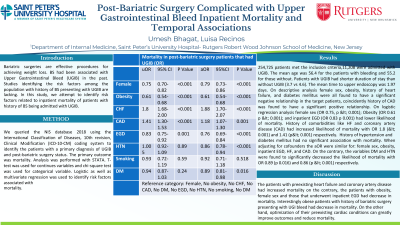 Introduction: Bariatric surgeries (BS) has been associated with Upper Gastrointestinal Bleed (UGIB) in the past. Studies identifying the mortality risk factors among the population with history of BS and being admitted with UGIB are lacking. In this study, we attempt to identify risk factors related to inpatient mortality of patients with history of BS being admitted with UGIB.

Methods: We queried the NIS database 2018 using the International Classification of Diseases, 10th revision, Clinical Modification (ICD-10-CM) coding system to identify the patients with a primary diagnosis of UGIB and post-bariatric surgery status. The primary outcome was mortality. Analysis was performed with STATA software. T test was used for continues variables and chi square test was used for categorical variable. Logistic as well as multivariate regression was used to identify risk factors

Results: 254,725 patients met the inclusion criteria,11,208 were admitted with UGIB. The mean age was 56.4 for the patients with bleeding and 55.2 for those without. Patients with UGIB had shorter duration of stay than without UGIB (3.7 vs 4.6). The mean time to upper endoscopy was 1.97 days. On descriptive analysis female sex, obesity, history of heart failure, and diabetes mellitus were all found to have a significant negative relationship in the target patients, coincidently history of CAD was found to have a significant positive relationship. On logistic regression analysis female sex (OR 0.75, p < 0.001); Obesity (OR 0.61 p < 0.001); and inpatient EGD (OR 0.83 p 0.001) had significantly lower likelihood of mortality. History of comorbidities like HF and coronary artery disease (CAD) had increased likelihood of mortality with OR 1.8 (< 0.001) and 1.41 (p< 0.001) respectively. History of hypertension and diabetes mellitus had no significant association with mortality. When adjusting for cofounders the aOR were similar for: female sex, obesity, inpatient EGD, HF, and CAD. On the contrary, the variables DM and HTN were found to significantly decreased the likelihood of mortality with OR 0.89 (p 0.016) and 0.86 (p < 0.001) respectively.