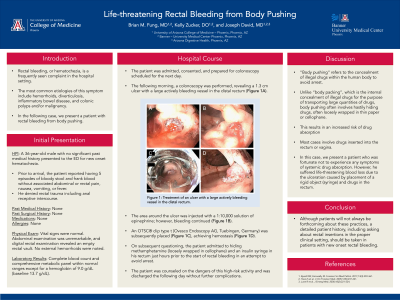 Introduction: Rectal bleeding, or hematochezia, is commonly caused by hemorrhoids, diverticulosis, inflammatory bowel disease, or malignancy. However, other etiologies are also possible. In the following case, we present a patient with rectal bleeding from body pushing.

Case Description/Methods: A 36-year-old previously healthy male presented to the emergency department for new onset hematochezia. Prior to arrival, the patient reported having 5 episodes of bloody stool without associated abdominal or rectal pain. He denied rectal trauma or anal receptive intercourse. On examination, his vital signs were normal. His abdomen was unremarkable and digital rectal examination revealed an empty rectal vault. Laboratory tests revealed a hemoglobin of 9.0 g/dL (baseline 13.7 g/dL), and the patient was scheduled for colonoscopy the following day. The following morning, his hemoglobin was noted to be 6.0 g/dL. After transfusion of 2 units of blood, colonoscopy was performed, revealing a 1.3 cm ulcer with a large actively bleeding vessel in the distal rectum. The area around the ulcer was injected with epinephrine; however, bleeding continued. Thus, an over-the-scope clip was placed, achieving hemostasis. After the procedure, the patient admitted to hiding methamphetamine (loosely wrapped in cellophane) and a syringe in his rectum prior to the start of rectal bleeding in an attempt to avoid arrest. The patient was counseled on the dangers of this high-risk activity and was discharged the following day without further complications.

Discussion: “Body pushing” refers to the concealment of illegal drugs within the human body to avoid arrest. Unlike “body packing”, which is the internal concealment of illegal drugs for the purpose of transporting large quantities of drugs, body pushing often involves hastily hiding drugs, often loosely wrapped in thin paper or cellophane, resulting in an increased risk of drug absorption. Most cases involve drugs inserted into the rectum or vagina. In this case, we present a patient who was fortunate not to experience any symptoms of systemic drug absorption. However, he suffered life-threatening blood loss due to the trauma caused by placement of a rigid object (syringe) and drugs in the rectum. Although patients will not always be forthcoming about these practices, a detailed patient history, including asking about rectal insertions in the proper clinical setting, should be taken in patients with new onset rectal bleeding.