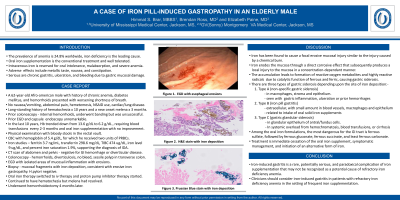 Introduction: The prevalence of anemia is about 25% worldwide, with iron deficiency being the most common etiology. Oral iron supplementation is the conventional treatment with intravenous iron reserved for oral iron intolerance, malabsorption, and severe anemia. Oral therapy is generally well-tolerated with minimal side effects. Uncommon but serious adverse effects are chronic gastritis, ulceration, and bleeding.

Case Description/Methods: A 62-year-old Afro-American male with chronic anemia and hemorrhoids presented with shortness of breath. He had a long-standing history of hematochezia and new-onset melena. He denied vomiting, abdominal pain, hematemesis, reflux symptoms, change in bowel habits, or weight loss. He denied any NSAID usage. He denied any heart or lung disease.

He had intermittent hematochezia for the past 10 years requiring blood transfusions. The melena started about 3 months ago. Prior to this admission, the patient had two EGDs, two colonoscopies, and one video capsule endoscopy. The colonoscopy showed internal hemorrhoids, the likely cause of chronic anemia. He underwent banding for hemorrhoids but was unsuccessful. EGD and capsule endoscopy was negative for any lesions. In the last 10 years, his Hb trended down from 13.6 g/dL to 6.2 g/dL requiring transfusions every 2-3 months. He had been on regular oral iron supplementation with no improvement.

The physical examination revealed bloody stool in the rectal vault. Lab work revealed Hb of 5.4 g/dL, for which he received PRBCs. His ferritin was 3.7 ng/mL, TIBC 474 ug/dL, iron level 9 µg/dL, and iron saturation 1.9%, supporting the diagnosis of IDA. CT scan of the abdomen and pelvis was negative for GI hemorrhage or diverticular disease. Colonoscopy revealed hemorrhoids, and diverticulosis with no bleeding. EGD showed isolated areas of mucosal inflammation with erosions. Biopsies revealed mucosal fragments with iron deposition, consistent with erosive iron gastropathy. Immunostaining for H. pylori was negative. Oral iron was switched to intravenous therapy and PPI therapy was initiated. On follow-up, he continued to have hematochezia but the melena had resolved and FOBT was negative.

Discussion: Iron-induced gastritis is a rare, potentially serious, and paradoxical complication of iron supplementation that may not be recognized as a potential cause of refractory iron deficiency anemia. Clinicians should consider iron-induced gastritis in patients with refractory iron deficiency anemia in the setting of frequent iron supplementation.