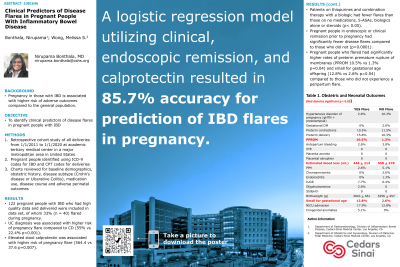 Introduction: Pregnancy in people with inflammatory bowel disease (IBD) is associated with a higher risk of adverse outcomes compared to the general population. Identification of clinical factors which predict flares could be used to guide treatment decisions. Our aim was to identify clinical predictors of disease flares in pregnant people with IBD.

Methods: A retrospective cohort study of all deliveries from 1/1/2011 to 1/1/2020 at an academic tertiary care medical center in a major metropolitan area in the United States. Pregnant people were identified using ICD-9 codes for IBD and CPT codes for deliveries. Charts were reviewed for baseline demographics, obstetric history, disease subtype (Crohn’s disease [CD] or ulcerative colitis [UC]), medication use, disease course and adverse outcomes during pregnancy.

Pregnant people who flared had significantly higher rates of preterm premature rupture of membranes (PPROM 10.5% vs 1.3% p=0.04) and small for gestational age offspring (12.8% vs 2.6% p=0.04) compared to those who did not experience a peripartum flare (Table 1). Rate of other adverse obstetric and neonatal outcomes did not differ between groups (Table 1).

Discussion: In our population of pregnant people with IBD, disease flares during pregnancy were associated with higher rates preterm premature rupture of membranes and small for gestational age offspring. Clinical and endoscopic remission along with calprotectin data may be sufficient to predict disease flares during pregnancy and assist in counseling and treating this group of patients to maximize optimal pregnancy outcomes.