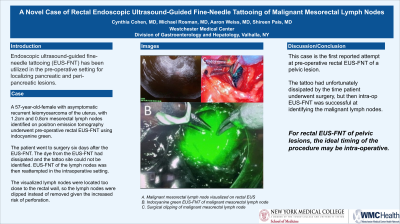 Introduction: Endoscopic ultrasound-guided fine-needle tattooing (EUS-FNT) has been utilized in the pre-operative setting for localizing lesions prior to surgical resection in order to facilitate surgical planning and decrease operative time. The current literature describes the use of EUS-FNT specifically for pancreatic and peri-pancreatic lesions. To our knowledge, there are no prior case reports describing the use of rectal EUS-FNT for pelvic lesions. We report a novel case of pre-operative rectal EUS-FNT of malignant mesorectal lymph nodes in a patient with recurrent uterine leiomyosarcoma.

Case Description/Methods: A 57-year-old-female with asymptomatic recurrent leiomyosarcoma of the uterus, with 1.2cm and 0.8cm mesorectal lymph nodes identified on positron emission tomography scan and recurrence of malignancy confirmed with rectal EUS-FNA, was planned for diagnostic laparoscopy and lymph node resection. To localize these small lesions, the patient underwent pre-operative rectal EUS-FNT of the two mesorectal lymph nodes using indocyanine green dye. The patient then went to surgery six days after the EUS-FNT, and during the surgery it was found that the dye from the EUS-FNT had dissipated and the tattoo site could not be identified. EUS-FNT of the lymph nodes was then reattempted in the intraoperative setting. The lymph nodes, which were located close to the rectal wall, were then visible to the surgeons. Given the increased risk of perforation with resection in this region, the lymph nodes were not removed instead were clipped. The patient will now undergo radiation therapy.

Discussion: This case of rectal EUS-FNT to localize mesorectal malignant lymph nodes for surgical planning, to our knowledge, is the first reported attempt at pre-operative rectal EUS-FNT of a pelvic lesion. The tattoo in this case had unfortunately dissipated by the time patient underwent surgery, though intra-op EUS-FNT was successful at identifying the malignant mesorectal lymph nodes. The outcomes of this particular case suggest that for rectal EUS-FNT of pelvic lesions, the ideal timing of the procedure may be intra-operative, though further cases are needed to establish the success rate when EUS-FNT is attempted pre-operatively.