Introduction: Rosai-Dorfman Disease (RDD) is a rare, non-Langerhans histiocytic disorder, typically presenting with massive cervical lymphadenopathy, although it can involve other sites including the axillary, inguinal, mediastinal, and retroperitoneal lymph nodes. It generally affects young patients with an average age of about 21 years old. Up to 43% of patients will have extranodal involvement in the central nervous system, soft tissue, skin, bone and/or salivary glands. Associated symptoms often include fevers, night sweats, and/or weight loss. A lymph node biopsy should reveal sinusoidal expansion with histiocyte infiltration. Immunostains are positive for S100, CD68, and CD163. They are also negative for CD1a and CD207, which excludes Langerhans histiocytosis. Optimal treatment for this disease is not well defined due to its rarity. 50% of cases resolve spontaneously, while others have been shown to respond to steroids or chemotherapeutic agents.

Case Description/Methods: A 29-year-old man presented with a one-year history of a partially mobile, firm, painless, 5 cm right medial thigh mass, but was otherwise asymptomatic. MRI of the thigh demonstrated a rim-enhancing 5.1 cm mass, concerning for sarcoma. A chest CT demonstrated two 1 cm solid pulmonary nodules and a 12.1 cm paravertebral mass in the posterior mediastinum, concerning for metastatic disease (Figure 1A). Ultrasound-guided core needle biopsy of the thigh mass was non-diagnostic and he was referred to gastroenterology. On endoscopic ultrasound (EUS), the mediastinal mass appeared as a well-defined, lobular and heterogeneous mass with scattered calcifications, and was without invasion of adjacent organs (Figures 1B & C). Surgical biopsy of the thigh mass and EUS-guided fine needle biopsy of the mediastinal mass both demonstrated a histiocytic neoplasm with emperipolesis and immunohistochemical staining consistent with Rosai-Dorfman disease (Figure 1D). He was referred to Hematology/Oncology and started on prednisone, however three-month interval imaging did not demonstrate any changes.

Discussion: Rosai-Dorfman disease is a rare histiocytic disorder, typically diagnosed by biopsy of the most accessible lymph nodes. Review of the literature shows only two case reports evaluated and diagnosed with EUS, both of which were colorectal. To our knowledge, this is the first case successfully diagnosed with an upper EUS guided biopsy. 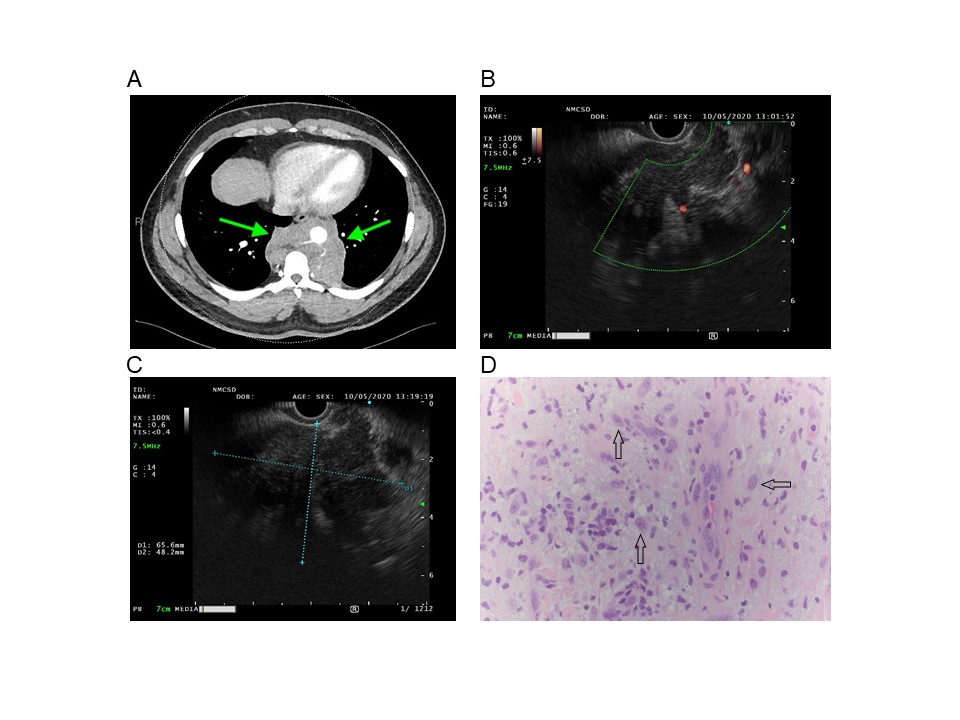