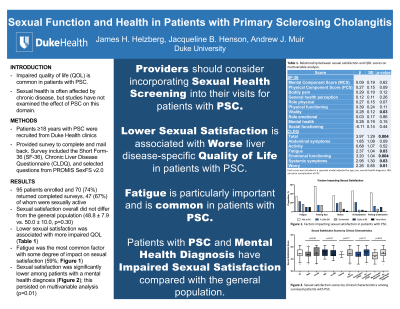 Introduction: Previous studies have demonstrated impaired quality of life (QOL) in patients with primary sclerosing cholangitis (PSC). An aspect of QOL that is often affected by chronic disease is sexual health, but the impact of PSC on this domain has not been examined.

Methods: Patients ≥18 with PSC presenting to Duke Health hepatology clinics between 3/2016-5/2018 were provided a survey to return via mail containing the Short Form-36 (SF-36), chronic liver disease questionnaire (CLDQ), and selected questions from the PROMIS SexFS v2.0 domains of satisfaction with sex life and factors interfering with sexual satisfaction. Satisfaction scores were converted to norm-based scores and were compared to U.S. population norms and compared by clinical characteristics. Correlation between sexual satisfaction and QOL scores was assessed. Multivariable models were constructed, first including clinical characteristics and next incorporating QOL scores.

Results: A total of 95 patients were enrolled and 70 (74%) returned complete surveys, 47 (67%) of whom were sexually active. Sexual satisfaction did not differ from the general population (p=0.30); however, it was significantly lower among PSC patients with a mental health diagnosis (p=0.03). There were no differences by sex (p=0.30), IBD status (p=0.57), presence of ostomy (p=0.77), or other clinical factors. Two patients had ostomies in the sexually active cohort. On multivariable analysis of clinical characteristics, mental health diagnosis was the lone significant predictor (p=0.006). Fatigue was a common factor interfering with sexual satisfaction, with 59% reporting an impact of at least “somewhat”. Lower satisfaction was associated with more impaired QOL (Table). In models adjusted for age, sex, IBD, complications of PSC, and mental health diagnosis, the CLDQ remained associated with sexual satisfaction (p=0.004), as did its fatigue (p=0.03), emotional functioning (p=0.004), systemic symptoms (p=0.03), and worry domains (p=0.01). The only aspect of the SF-36 that remained significantly associated was the vitality domain (p=0.03).

Discussion: Sexual satisfaction in PSC patients is similar to the general population, but those with mental health diagnoses have more impaired satisfaction. In addition, lower sexual satisfaction is associated with more impaired liver disease specific QOL. Fatigue was a particularly important factor and is common in PSC. Providers should consider incorporating sexual health screening into their visits with patients with PSC.

Table: Correlation between sexual satisfaction and SF-36 and CLDQ composite and domain scores