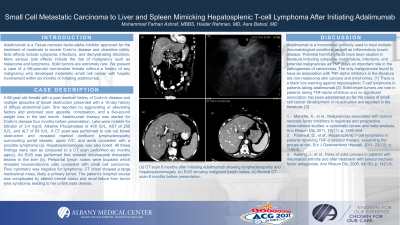 Introduction: Adalimumab is a Tissue necrosis factor-alpha inhibitor approved for the treatment of moderate to severe Crohn's disease and ulcerative colitis. Side effects include cytopenia, infections, and demyelinating disorders. More serious side effects include the risk of malignancy such as melanoma and lymphoma. Solid tumors are extremely rare. We present a case of a 68-year-old non-smoker female without a history of any malignancy who developed metastatic small cell cancer with hepatic involvement within six months of initiating adalimumab.

Case Description/Methods: A 68-year-old female with a past medical history of Crohn's disease and multiple episodes of bowel obstruction presented with a 10-day history of diffuse abdominal pain. She reported no aggravating or alleviating factors and endorsed poor appetite, constipation, and a five-pound weight loss in the last month. Adalimumab therapy was started for Crohn's disease four months before presentation. Labs were notable for bilirubin of 3.4 mg/dl, Alk Phos of 458 IU/L, AST of 255 IU/L, and ALT of 68 IU/L. A CT scan was performed to rule out bowel obstruction and revealed marked confluent lymphadenopathy surrounding portal vessels, upper IVC, and aorta consistent with a possible lymphoma (a). Hepatosplenomegaly was also noted. All these findings were new as compared to a CT scan performed six months ago(c). An EUS was performed that showed innumerable metastatic lesions in the liver (b). Periportal lymph nodes were biopsied which revealed neuroendocrine cells consistent with small cell carcinoma. Flow cytometry was negative for lymphoma. CT chest showed a large mediastinal mass, likely a primary tumor. The patient’s hospital course was complicated by altered mental status and renal failure from tumor lysis syndrome, leading to her unfortunate demise.

Discussion: Adalimumab is a monoclonal antibody used to treat multiple rheumatological conditions as well as inflammatory bowel disease. Potential harmful effects have been studied in literature including cytopenia, heart failure, infections, and potential malignancies as TNF plays an important role in the pathogenesis of carcinomas. Non-melanoma skin cancers and lymphomas including hepatosplenic T-cell lymphoma are the most commonly reported malignancies with TNF-alpha inhibitors. Solid-organ tumors are rare and small cell carcinoma has not been reported so far in the literature. 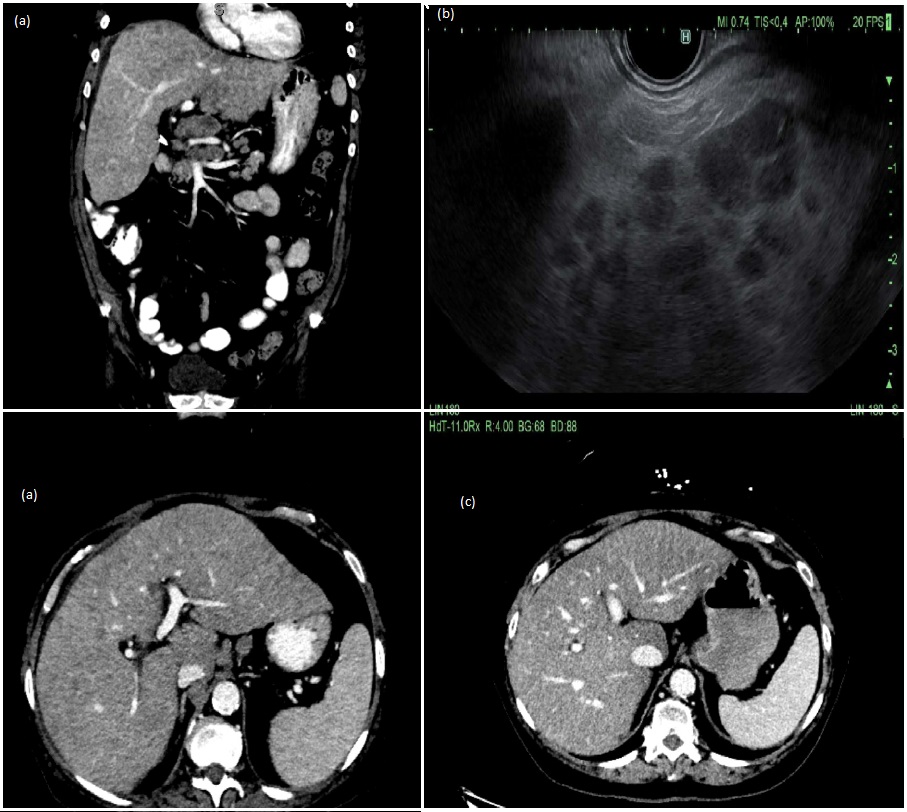 Figure: CT scan before and after starting Adalimumab