Introduction: Extrahepatic metastasis is infrequent in HCC and even rarer to spread to one of the adrenal glands. We present a rare case of a patient found with HCC and bilateral adrenal gland metastases.

Case Description/Methods: 55-year-old male with no medical history presented after a trip and fall with concurrent alcohol use. Review of systems was negative except for losing 25 pounds and yellowing skin over 6 months. He smoked and endorsed drinking three to five alcoholic beverages daily for 20 years. He had not seen a doctor in many years and denied any pertinent family history.
CT Angiogram was performed due to concerns for pulmonary embolism with an elevated D-Dimer and revealed nodules in the lung, liver and kidney. CT of the abdomen and pelvis with IV contrast described cirrhotic liver, mild splenomegaly, trace ascites, a large 7.0 cm heterogeneous mass in the inferolateral right hepatic lobe, and a bilateral adrenal masses with the left measuring up to 12.2 cm and the right measuring up to 4.7 cm. Tumor thrombus of the left renal vein was present with left scrotal varicocele due to invasion by the left adrenal lesion. Liver chemistries showed elevated bilirubin and a 2:1 ratio of AST:ALT. Hepatitis serologies were negative. His CEA and CA 19-19 tumor markers were negative; however, his AFP was noted to be 91942 ng/mL. Biopsy of the left adrenal mass revealed metastatic HCC with bile production and numerous intranuclear pseudoinclusions. He was discharged from the hospital on Lenvatinib therapy.

Discussion: The majority of patients diagnosed with HCC present with advanced disease and extrahepatic spread is present at the time of diagnosis in up to 15% of cases. Adrenal metastasis is rare to find with an incidence of approximately 11% compared to other more common locations such as the lungs, lymph nodes, and bones. HCC patients with bilateral adrenal metastasis were treated with resection, local ablative therapy, or systemic therapy; however, reports of previous treatment outcomes especially following liver transplantation are rare and there are no definitive guidelines. Due to cirrhosis and metastatic disease, he was not a candidate for combined immunotherapy or resection. Sorafenib has been used for this stage of HCC in the past, however the REFLECT trials have shown Lenvatinib to be non-inferior in efficacy and has a manageable tolerability profile. Considering the significant improvements in response rate, progression-free survival, and time to progression, Lenvatinib was chosen for the patient. 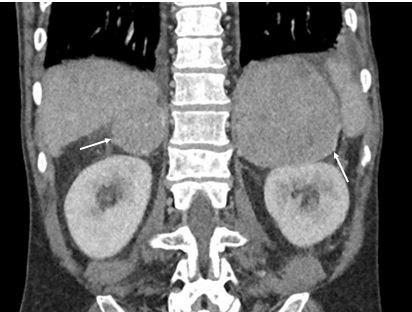