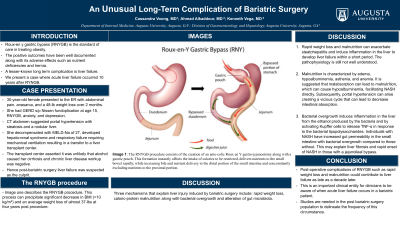 Introduction: Roux-en y gastric bypass (RNYGB) is the surgical standard of care in treating obesity. The positive outcomes have been well documented along with its adverse effects such as nutrient deficiencies and hernia. A lesser-known long-term complication is liver failure.

Case Description/Methods: Case: 30-year-old female presented to ER with abdominal pain, anasarca, and 48-lb weight loss. History was significant for GERD s/p Nissen fundoplication at age 15 and subsequent RNYGB. CT abdomen suggested portal hypertension with steatosis and nodular liver. There was no previous diagnosis of cirrhosis, however she had past heavy alcohol intake. During hospitalization, she decompensated with MELD score of 27, INR 2.1 and respiratory failure requiring mechanical ventilation. She developed hepato-renal syndrome resulting in transfer to liver transplant center who determined it was unlikely that alcoholic cirrhosis contributed to her decompensation. Hence, post-bariatric surgery liver failure was suspected as the culprit given a negative chronic liver disease workup.

Discussion: Three mechanisms that explain liver injury induced by bariatric surgery include rapid weight loss, caloric-protein malnutrition along with bacterial overgrowth and alteration of gut microbiota. Rapid weight loss and malnutrition can exacerbate steatohepatitis and induce inflammation in the liver resulting in liver failure. The pathophysiology is still not well understood. Malnutrition is characterized by edema, hypoalbuminemia, asthenia, and anemia. Malabsorption can lead to malnutrition, which can cause hypoalbuminemia, facilitating NASH directly. Subsequently, portal hypertension can arise creating a vicious cycle as it can lead to decreased intestinal absorption. Bacterial overgrowth induces inflammation in the liver from ethanol produced by bacteria and activating Kupffer cells to release TNF-α in response to bacterial lipopolysaccharides. Individuals with NASH have increased gut permeability in the small intestine with bacterial overgrowth. This may explain liver fibrosis and rapid onset of NASH in those with a jejunoileal bypass.

In conclusion, post-operative complications of RNYGB such as rapid weight loss and malnutrition could contribute to liver failure. This is an important clinical entity for clinicians to be aware of when acute liver failure occurs in a bariatric patient. Studies are needed in the post surgical bariatric population to further delineate and understand this clinical situation.