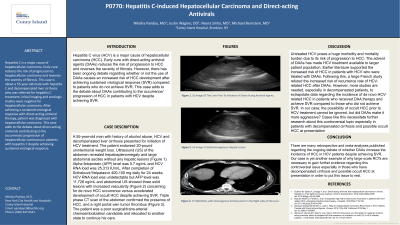 Introduction: Hepatitis C virus (HCV) is a major cause of hepatocellular carcinoma (HCC). Early cure with direct-acting antiviral agents (DAAs) reduces the risk of progression to HCC and reverses the severity of fibrosis. However, there has been ongoing debate regarding whether or not the use of DAAs causes an increased risk of HCC development after achieving sustained virological response (SVR) compared to patients who do not achieve SVR. This case adds to the debate about DAAs contributing to the occurrence/ progression of HCC in patients with HCV despite achieving SVR.

Case Description/Methods: A 55-year-old man with history of alcohol abuse, HCV and decompensated liver cirrhosis presented for initiation of HCV treatment. The patient endorsed 20-pound unintentional weight loss. Ultrasound (US) of the abdomen revealed hepatosplenomegaly and large abdominal ascites without any hepatic lesions (Figure 1). Alpha fetoprotein (AFP) level was 5.7 ng/mL and HCV RNA load was 25,313 IU/mL. After completion of Sofosbuvir/Velpatasvir 400-100 mg daily for 24 weeks, HCV RNA load was undetectable but AFP level was 11,728 ng/mL and abdominal US showed three solid lesions with increased vascularity (Figure 2) concerning for de novo HCC occurrence versus accelerated development of occult HCC despite achieving SVR. Triple phase CT scan of the abdomen confirmed the presence of HCC, and a right portal vein tumor thrombus (Figure 3). The patient was a poor surgical/transarterial chemoembolization candidate and relocated to another state to continue his care.

Discussion: Untreated HCV poses a huge morbidity and mortality burden due to its risk of progression to HCC. The advent of DAAs has made HCV treatment available to larger patient population. Earlier literature supported the increased risk of HCC in patients with HCV who were treated with DAAs. Following this, a large French study refuted the increased risk of recurrence rate of HCV-related HCC after DAAs. However, more studies are needed, especially in decompensated patients, to extrapolate data regarding the incidence of de novo HCV-related HCC in patients who received DAA therapy and achieve SVR compared to those who did not achieve SVR. In our case, the possibility of occult HCC prior to HCV treatment cannot be ignored, but did DAAs make it more aggressive? Cases like this necessitate further research about this controversial topic especially in patients with decompensated cirrhosis and possible occult HCC at presentation.

Figure: Figure 1: US Image Of The Liver Prior To Initiation of Direct-Acting Antiviral Agents
Figure 2: US Image of Solid Heterogenous Hepatic Lesion
Figure 3: CT Abdomen/Pelvis with Heterogenous Enhancement in the Right Lobe of the Liver