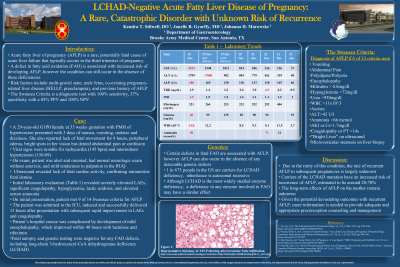 Introduction: Acute fatty liver of pregnancy (AFLP) is a rare, potentially fatal cause of acute liver failure occurring in the third trimester of pregnancy. A defect in fatty acid oxidation (FAO) is associated with increased risk of developing AFLP, however the condition may still occur in the absence of these deficiencies. Due to the rarity of this condition, the rate of recurrence in subsequent pregnancies is largely unknown.

Case Description/Methods: A 29-year-old G1P0 female at 33 weeks gestation with a history of hypertension presented with 3 days of nausea, vomiting, malaise and dizziness. She also reported lack of fetal movement for 8 hours, peripheral edema, and bright spots in her vision. She denied any abdominal pain or confusion. On exam, patient was alert and oriented, had normal neurologic exam with no asterexis, and mild tenderness to palpation in the RUQ. Vital signs were notable for tachycardia (145 bpm) and intermittent hypertension (156/69). Initial laboratory evaluation (Table 1) revealed mild leukocytosis, normal platelet count, severely elevated LAEs, significant coagulopathy, hypoglycemia, lactic acidosis, and elevated serum ammonia. The patient met 9 of 14 Swansea criteria for AFLP on presentation. Ultrasound revealed lack of fetal cardiac activity, confirming intrauterine fetal demise. The patient was admitted to the ICU and induction of labor was initiated. She successfully delivered 13 hours after presentation with subsequent rapid improvement in LAEs and coagulopathy. Patient’s hospital course was complicated by development of mild encephalopathy, which improved with lactulose and rifaximin within 48 hours. Fetal autopsy and genetic testing were negative for any FAO defects, including long-chain 3-hydroxyacyl-CoA dehydrogenase deficiency (LCHAD).

Discussion: While advances in diagnosis, management and subsequent mortality related to AFLP have improved, the rate of recurrence in future pregnancies remains largely undetermined. There are only a few cases of recurrent AFLP published in the literature. Carriers of the LCHAD mutation have an increased risk of recurrence of AFLP, estimated to be around 20-70%. In women without an identifiable FAO abnormality recurrence of AFLP is rare, but has been reported. Given the potential devastating outcomes with recurrent AFLP, more information is needed to provide adequate and appropriate preconception counseling and management.