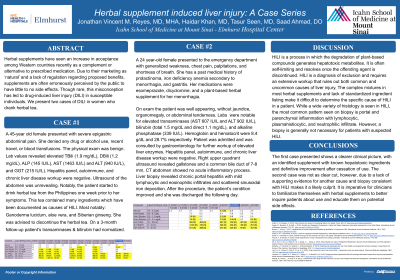 Introduction: Herb-induced liver injury (HILI) is a rare cause of non-infectious hepatitis. Herbal supplements have seen an increase in acceptance as an alternative to prescribed medications. These supplements are often perceived to be safe and this misconception has led to an increase in cases of HILI.

Case Description/Methods: A 45-year old female presented with severe epigastric abdominal pain. She denied any drug or alcohol use, recent travel, or blood transfusions. The physical exam was benign. Lab values revealed elevated TBili (1.9 mg/dL), DBili (1.2 mg/dL), ALP (145 IU/L), AST (1463 IU/L) and ALT (940 IU/L), and GGT (215 IU/L). Hepatitis panel, autoimmune, and chronic liver disease workup were negative. Ultrasound of the abdomen was unrevealing. Notably, the patient started to drink herbal tea from the Philippines one week prior to her symptoms. This tea contained many ingredients which have been documented as causes of HILI. Most notably: Ganoderma lucidum, aloe vera, and Siberian ginseng. She was advised to discontinue the herbal tea. On a 3-month follow-up patient’s transaminases and bilirubin had normalized.

Discussion: HILI is a process in which the degradation of plant-based compounds generates hepatotoxic metabolites. It is often self-limiting. HILI is a diagnosis of exclusion and requires an extensive workup that rules out both common and uncommon causes of liver injury. While a wide variety of histology is seen in HILI, the most common pattern seen on biopsy is portal and parenchymal inflammation with lymphocytic, plasmahistiocytic, and neutrophilic infiltrate. However, a biopsy is generally not necessary for patients with suspected HILI. The first case shows a clear clinical diagnosis of HILI while the second case required biopsy to support a diagnosis of HILI. It is imperative for clinicians to familiarize themselves with herbal supplements to better inquire patients about use and educate them on potential side effects.