P0891 - Pancreatoblastoma: A Rare Cause of Acute Abdominal Pain in a Pediatric Patient 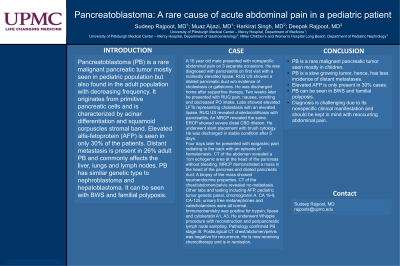 Introduction: Pancreatoblastoma (PB) is a rare malignant pancreatic tumor mostly seen in pediatric population but also found in the adult population with decreasing frequency. It originates from primitive pancreatic cells and is characterized by acinar differentiation and squamoid corpuscles stromal band. Elevated alfa-fetoprotein (AFP) is seen in only 30% of the patients. Distant metastasis is present in 26% adult PB and commonly affects the liver, lungs and lymph nodes. PB has similar genetic type to nephroblastoma and hepatoblastoma. It can be seen with BWS and familial polyposis.

Case Description/Methods: A 16 year old male presented with nonspecific abdominal pain on 3 separate occasions. He was diagnosed with pancreatitis on first visit with a markedly elevated lipase. RUQ US showed a dilated pancreatic duct w/o evidence of cholestasis or gallstones. He was discharged home after supportive therapy. Two weeks later he presented with RUQ pain, nausea, vomiting and decreased PO intake. Labs showed elevated LFTs representing cholestasis with an elevated lipase. RUQ US revealed choledocolithiasis with pancreatitis. An MRCP revealed the same. ERCP showed severe distal CBD dilation. He underwent stent placement with brush cytology. He was discharged in stable condition after 5 days.

Four days later he presented with epigastric pain radiating to the back with an episode of hematemesis. CT of the abdomen revealed a 1cm echogenic area at the head of the pancreas without bleeding. MRCP demonstrated a mass in the head of the pancreas and dilated pancreatic duct. A biopsy of the mass showed neuroendocrine properties. CT of the chest/abdomen/pelvis revealed no metastasis.

Other labs and testing including AFP, pediatric tumor genetic panel, chromogranin A, CA 19-9, CA-125, urinary free metanephrines and catecholamines were all normal. Immunochemistry was positive for trypsin, lipase and cytokeratin A1, A3. He underwent Whipple procedure with reconstruction and peripancreatic lymph node sampling. Pathology confirmed PB stage III. Postsurgical CT chest/abdomen/pelvis was negative for recurrence. He is now receiving chemotherapy and is in remission.

PB is a slow growing tumor, hence, has less incidence of distant metastases.

Elevated AFP is only present in 30% cases.

PB can be seen in BWS and familial polyposis.

Diagnosis is challenging due to its nonspecific clinical manifestation and should be kept in mind with reoccurring abdominal pain.