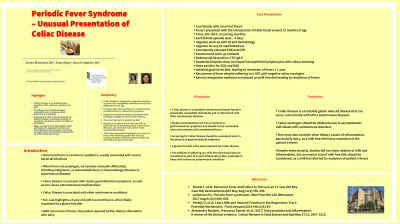 Introduction: Recurrent fever is common in children and mostly associated with viral or bacterial infections. However, when there is a frequent and prolonged fever, we consider malignancy, immunodeficiency syndromes, rheumatologic diseases, autoimmune diseases, and fever syndromes in the differential diagnosis. We present a 6 year old girl who was diagnosed with periodic fever syndrome and diagnosed with celiac disease.

Case Description/Methods: A 6-year-old girl initially presented to rheumatology clinic at age 2 for recurrent fevers occurring since the age of 5 months. High fevers started when table foods were introduced into her diet. Fevers ranged from 103-104 degrees Fahrenheit with fatigue, occurring monthly with each episode lasting 4 days. She had negative infectious and hematology work ups. She continued to gain weight and was growing well without having any gastrointestinal symptoms or extraintesintal manifestations. However, she had a consistently elevated ESR and CRP. She was prescribed a course of prednisone at the beginning of an attack which usually led to resolution of her fever. Her work up continued with further evaluation for autoimmune diseases and she was found to have a positive endomysial antibody and tissue transglutaminase IgA of 8. She underwent endoscopic evaluation and duodenal biopsies revealed mildly increased intraepithelial lymphocytes with mild villous blunting. HLA testing was positive for both DQ2 and DQ8. She was started on a gluten free diet, which led to normalization of her serologies, as well as resolution of her fevers for 1 year. After 1 year, she developed recurrence of fevers with episodes occurring every 2 months, but not as intense as before. She was subsequently placed on a milk free diet as part of integrative anti-inflammatory diet protocol leading to resolution of her symptoms for the last one year.

Discussion: Celiac disease is a treatable autoimmune disease found in genetically susceptible individuals and is often found with other autoimmune diseases. Atypical presentations are not as common as gastrointestinal symptoms and should not be overlooked when one presents with unexplained fevers. Screening for Celiac Disease should be considered even in the absence of gastrointestinal symptoms. A gluten free diet is the sole treatment for Celiac Disease. The addition of adhering to a milk free diet should also be considered as part of an anti-inflammatory diet, especially in those with refractory autoimmune conditions.