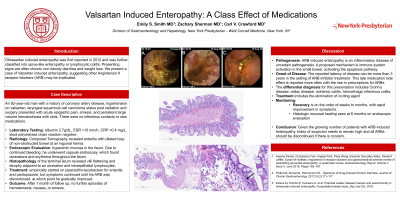 Case Description/Methods: An 82-year-old man with a history of coronary artery disease, hypertension on valsartan, a right inguinal hernia, laryngeal squamous cell carcinoma status post radiation and surgery presented with acute epigastric pain, emesis and large volume hematochezia with clots. There were no infectious contacts or new medications. Labs were notable for albumin 2.7 g/dL, stool PCR negative, and normal inflammatory markers. CT revealed enteritis with dilated loop of non-obstructed bowel at an inguinal hernia. Colonoscopy was performed for persistent hematochezia and found hyperemic mucosa in the ileum. Due to continued bleeding, he underwent capsule endoscopy, which found ulcerations and erythema throughout the ileum (See Figure 1). Histopathology of the terminal ileum revealed villi flattening adjacent to an ulceration and intraepithelial lymphocytes. He was empirically started on piperacillin-tazobactam for enteritis and pantoprazole, but symptoms continued until his ARB was discontinued, at which point he gradually improved.

Discussion: ARB induced enteropathy is an inflammatory disease of uncertain pathogenesis. The reported latency of disease can be greater than 3 years. The differential for his presentation includes Crohn’s disease, celiac disease, ischemic colitis, hemorrhagic infectious colitis. Treatment is elimination of inciting agent, and recovery is on the order of weeks to months. Histologic mucosal healing is usually seen at 6 months. Given the growing number of patients with ARB-induced enteropathy, index of suspicion needs to remain high and all ARBs should be discontinued if there is concern.