P0947 - Hemophagocytic Lymphohistiocytosis as a Complication of Refractory Celiac Disease Type II That Transforms into a T-cell Lymphoma: A Case Report 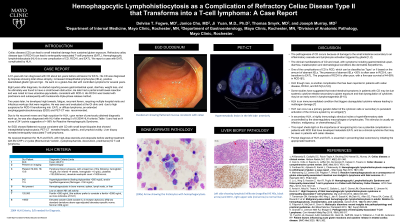 Case Description/Methods: A 61-year-old man with history of CD was admitted for EATL complicated by HLH. He was diagnosed with CD about ten years before this admission. His CD was diagnosed by biopsies showing total villous atrophy, increased intraepithelial lymphocytes (IELs), positive deamidated gliadin IgG >150, and positive deamidated gliadin IgA at 35. His endomysial antibody was indeterminate, but his tTG IgA was negative. He went on a gluten-free diet with controlled symptoms for several years. Eight years after diagnosis, he started reporting severe gastrointestinal upset, diarrhea, pain, weight loss, and he ultimately was found to have a small bowel obstruction. He later had a partial small bowel resection and was noted to have ulcerative jejunoileitis, consistent with RCD2. His RCD was treated with prednisone and subsequently with budesonide starting at 9 mg triple-phase release method, and then at 3 mg twice a day. He developed night sweats and fatigue, requiring multiple infectious workups that were negative. Due to high suspicions for EATL, a PET-CT was obtained that revealed hepatic, splenic, and lymphoid avidity. An extended esophagogastroduodenoscopy (EGD) with small bowel biopsies showed intraepithelial lymphocytosis; liver biopsy revealed enteropathy-associated T-cell lymphoma. He was then diagnosed with HLH after meeting 5 of 8 2004 HLH criteria (Table 1) and had an H score of 241 points suggestive of > 99% for Reactive Hemophagocytic Syndrome. Further workup included paratracheal lymph node biopsy, which showed CD30+ T-cell lymphoma, gamma delta phenotype, and a bone marrow biopsy with 20-30% involvement by 1-5% CD30+ T-cell lymphoma. He received treatment for HLH and EATL with high-dose steroids and etoposide before starting treatment with BV-CHP (Brentuximab Vedotin, cyclophosphamide, doxorubicin, prednisone) for T-cell lymphoma.

Discussion: The prognosis of RCD2 is often poor and can lead to full-blown transformation to EATL. HLH is a severe inflammatory and immune-mediated disease that can be associated with CD and EATL and prompt diagnosis is essential in preventing fatal outcomes.