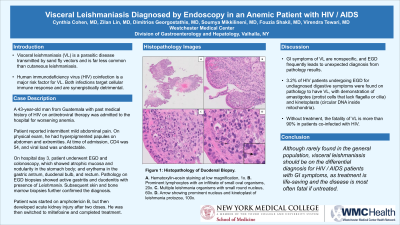 Introduction: Vicseral Leishmaniasis (VL) is a parasitic disease transmitted by sand fly vectors. It is far less common than cutaneous Leishmaniasis. Human immunodeficiency virus (HIV) co-infection is one of the major risk factors. Incubation period is 2 to 6 months but can last several years. We report a rare case of VL discovered by esophagogastroduodenoscopy (EGD) for anemia workup in a patient recently diagnosed with HIV.

Case Description/Methods: A 43-year-old man from Guatemala with past medical history of HIV diagnosed one year prior and on antiretroviral therapy was admitted to the hospital for worsening anemia. He was seen by his primary care physician one week prior to presentation due to subjective fever and chest pain, and was subsequently found to have a hemoglobin drop from 10 g/dl to 7 g/dl within months. The patient reported bleeding from his gums and nose, as well as intermittent mild abdominal pain. On physical exam, he had hyperpigmented papules on the abdomen and extremities. At the time of admission, CD4 was 54, and the viral load was undetectable. On hospital day 3, the patient underwent EGD and colonoscopy for anemia workup, which showed atrophic mucosa and nodularity in the stomach body; and erythema in the gastric antrum, duodenal bulb, and rectum. Pathology on EGD biopsies showed active gastritis and duodenitis with presence of organisms measuring 3 to 5 microns morphologically consistent with Leishmania species. The patient also underwent punch biopsy of a right leg papule by dermatology, and pathology reported suppurative granulomatous dermatitis with many amastigotes within histiocytes, compatible with Leishmaniasis. Subsequent bone marrow biopsy further confirmed the diagnosis. He was started on amphotericin B, but then developed acute kidney injury after two doses. He was then switched to miltefosine and completed the treatment.

Discussion: Both HIV and VL infections target cellular immune response and have synergistically detrimental effects. Infection of atypical sites may occur when CD4 < 50, including gastrointestinal (GI) tract, peritoneal space, lung, pleural space, and skin. GI symptoms of VL are nonspecific, and EGD frequently leads to unexpected diagnosis from pathology results. 3.2% of HIV patients undergoing EGD for undiagnosed digestive symptoms were found to have amastigotes. As in our case, VL was not anticipated as the cause of the patient’s anemia. Without treatment, the fatality of VL is more than 90% in patients co-infected with HIV.