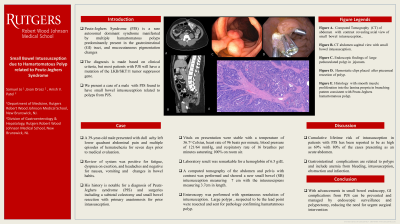 Introduction: Peutz-Jeghers syndrome (PJS) is a rare autosomal dominant syndrome manifested by multiple hamartomatous polyps, predominantly present in the gastrointestinal tract, and mucocutaneous pigmentation changes. Cumulative lifetime risk of intussusception in patients with PJS has been reported to be as high as 69% with 80% of the cases presenting as an acute abdomen. The median size of polyps causing intussusception is 3.5 cm. We present a case of small bowel intussusception attributed to hamartomatous polyps.

Case Description/Methods: A 39-year-old male with a history of PJS and prior small bowel resection due to obstruction, presented with abdominal pain and multiple episodes of hematochezia. His hemoglobin on arrival was 6.5 g/dL, however remained hemodynamically stable with blood transfusion. CT of the abdomen and pelvis with contrast revealed a new small bowel (SB) intussusception measuring 7 cm with the intussuscipiens measuring 3.7cm [Fig. A,B]. Since the patient remained clinically stable, an enteroscopy was performed to identify the site of intussusception with possible endoscopic reduction. Multiple large small bowel polyps were identified, the largest measuring 5 cm in the jejunum, 50 cm distal to the site of anastomosis and likely lead point of the intussusception [Fig C.]. A repeat enteroscopy was performed with piecemeal resection of the large jejunal polyp with hot snare and clip placement [Fig. D]. The patient’s hematochezia and abdominal pain resolved. He was discharged with planned staged resection of remaining large SB polyps and surveillance colonoscopy. Histology of the polyps showed proliferation of smooth muscle into the lamina propria in branching pattern and normal intestinal epithelium consistent with Peutz-Jeghers hamartomatous polyp [Figure E].

Discussion: Peutz-Jeghers syndrome is associated with increased risk of both gastrointestinal and non-gastrointestinal malignancy including, but not limited to, colon, pancreas, breast, lung, and ovarian cancer. Gastrointestinal complications are related to polyps and include anemia from bleeding, intussusception, obstruction and infarction. Timely recognition and treatment is important as the complications can be fatal. Fortunately with advancements in small bowel endoscopy, these complications can be prevented and managed by endoscopic surveillance and polypectomy, reducing the need for urgent surgical intervention. 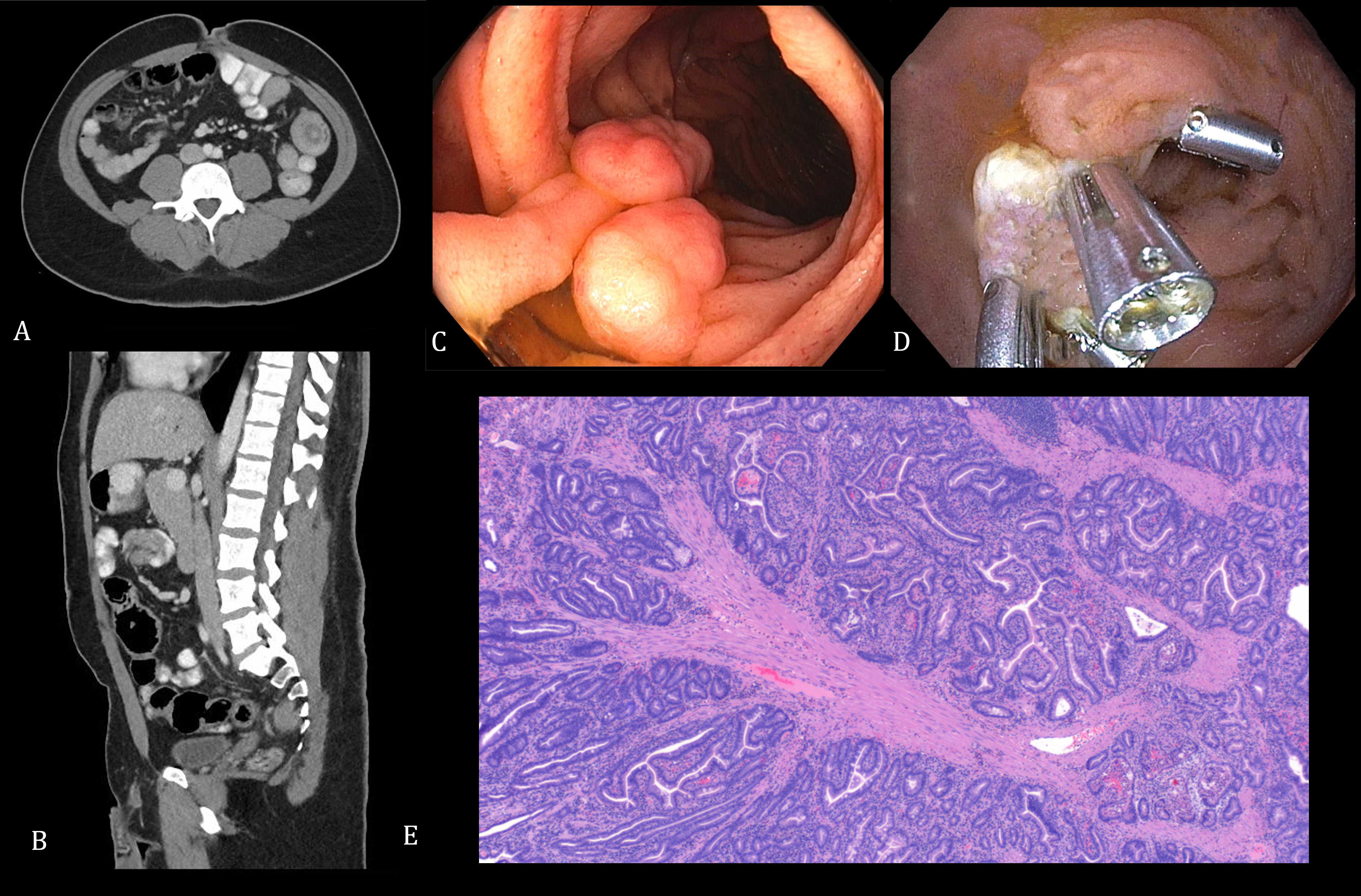