P0996 - A Decade of Change in the Gastric Mucosa 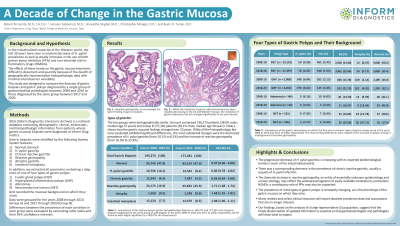 Introduction: In the industrialized countries of the Western world, the last 30 years have seen a constant decrease of H. pylori prevalence as well as steady increases in the use of both proton pump inhibitors (PPIs) and non-steroidal anti-inflammatory drugs (NSAIDs). The effects of these trends on the gastric mucosa have been difficult to document and quantify because of the dearth of geographically representative histopathologic data with minimal interobserver variability. This study was designed to compare the features of gastric biopsies diagnosed by a single group of gastrointestinal pathologists between 2008 and 2010 to those diagnosed by the same group between 2017 and 2020.

Methods: We used the IDEA (Inform Diagnostics Electronic Archives), a national database containing demographic, clinical, endoscopic, and histopathologic information from patients whose gastric mucosal biopsies were diagnosed at Inform Diagnostics. Gastric biopsies were stratified by the following Sydney System features: 1) normal stomach; 2) H. pylori gastritis; 3) chronic inactive gastritis; 4) reactive gastropathy (RG); 5) atrophic gastritis; and 6) intestinal metaplasia. Data were grouped for the years 2008 through 2010 (group A) and 2017 through 2020 (group B). Differences between the prevalence of each condition in each group were evaluated by calculating odds ratios and their 95% confidence intervals.

Results: The two groups were demographically similar: group A comprised 196,273 patients (38.0% male; median age 57 years) and group B 177,281 patients (38.1% male; median age 58 years). Table 1 shows how the gastric mucosal findings changed over 10 years. While all the histopathologic features evaluated exhibited significant differences, the most substantial changes were the decreased prevalence of H. pylori gastritis (from 10.1% to 8.2%) and the increase of reactive gastropathy (from 16.9% to 25.9%).

Discussion: The progressive decrease of H. pylori gastritis is in keeping with its reported epidemiological trends in much of the industrialized world. This was accompanied by a corresponding decrease in the prevalence of chronic inactive gastritis, usually a sequela of H. pylori infection. The dramatic increase in reactive gastropathy, an entity of essentially unknown epidemiology and unclear etiology, may reflect the widespread ingestion of easily available medications, particularly NSAIDs; a contributory role of PPIs may also be suspected.


Table: Comparison of the Sydney System gastric histopathologic features in 196,273 and 177,281 sets of gastric biopsies diagnosed by the same group of pathologists in the years 2008 to 2010 and 2017-2020, respectively. All differences were highly significant (p < .0001 for all comparisons).