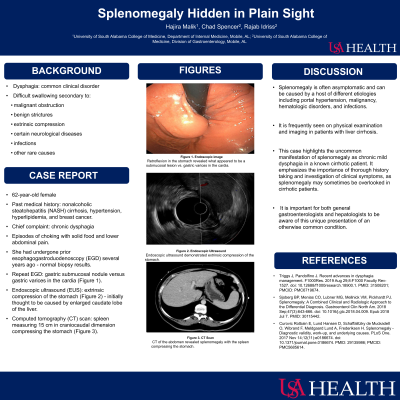 Introduction: Dysphagia is a common clinical disorder often caused by narrowing of esophagus secondary to malignancy or strictures, extrinsic compression of the stomach or esophagus by tumors, and certain neurological diseases. However, there are many rare causes of dysphagia which are less frequently encountered in regular clinical practice. We present the case of an elderly female with a past medical history of liver cirrhosis who presented with mild chronic dysphagia secondary to underlying splenomegaly.

Case Description/Methods: A 62-year-old female with a past medical history of nonalcoholic steatohepatitis (NASH) cirrhosis, hypertension, hyperlipidemia, and breast cancer presented with chronic dysphagia. Patient reported episodes of choking with solid food along with lower abdominal pain. She had undergone prior esophagogastroduodenoscopy (EGD) several years ago which yielded normal biopsy results. Repeat EGD was performed which was concerning for a gastric submucosal nodule versus gastric varices in the cardia. An endoscopic ultrasound (EUS) was then performed to further examine the cardia which demonstrated extrinsic compression of the stomach which was initially thought to be caused by enlarged spleen. A computed tomography (CT) scan was obtained which revealed a spleen measuring 15 cm in craniocaudal dimension compressing the stomach. This patient had been suffering from dysphagia for many years secondary to splenomegaly caused by portal hypertension.

Discussion: Splenomegaly is often asymptomatic and can be caused by a host of different etiologies including portal hypertension, malignancy, hematologic disorders, and infections. It is frequently assessed on physical examination and imaging in patients with liver cirrhosis. This case highlights the uncommon manifestation of splenomegaly as a cause of chronic dysphagia in a cirrhotic patient. It also emphasizes the importance of thorough history taking and investigation of clinical symptoms, as splenomegaly may sometimes be overlooked as a cause of dysphagia in cirrhotic patients. It is important for both general gastroenterologists and hepatologists to be aware of this unique presentation of an otherwise common condition.