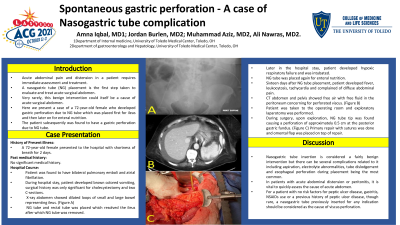 Introduction: Acute abdominal pain and distension in a patient requires immediate assessment and treatment. A nasogastric tube (NG) placement is the first step taken to evaluate and treat acute surgical abdomen. Very rarely, this benign intervention could itself be a cause of acute surgical abdomen. Here we present a case of a 72-year-old female who developed gastric perforation due to NG tube which was placed first for ileus and then later on for enteral nutrition. The patient subsequently was found to have a gastric perforation due to NG tube.

Case Description/Methods: A 72-year-old female with no significant past medical history presented to the hospital with shortness of breath for 2 days. Patient was found to have bilateral pulmonary emboli and atrial fibrillation. During hospital stay, patient developed brown colored vomiting, surgical history was only significant for cholecystectomy and two C-sections. X-ray abdomen showed dilated loops of small and large bowel representing ileus. NG tube and rectal tube was placed which resolved the ileus after which NG tube was removed. Later in the hospital stay, patient developed hypoxic respiratory failure and was intubated. NG tube was placed again for enteral nutrition. Sixteen days after NG tube placement, patient developed fever, leukocytosis, tachycardia and complained of diffuse abdominal pain. CT abdomen and pelvis showed free air with free fluid in the peritoneum concerning for perforated viscus. Patient was taken to the operating room and exploratory laparotomy was performed. During surgery, upon exploration, NG tube tip was found causing a perforation of approximately 0.5 cm at the posterior gastric fundus. Primary repair with sutures was done and omental flap was placed on top of repair.

Discussion: The most common indication for placement of a nasogastric tube is to decompress the stomach in the setting of bowel obstruction. Nasogastric tube insertion is considered a fairly benign intervention but there can be several complications related to it including aspiration, electrolyte abnormalities, tube dislodgement and esophageal perforation during placement being the most common. In patients with acute abdominal distension or peritonitis, it is vital to quickly assess the cause of acute abdomen. For a patient with no risk factors for peptic ulcer disease, gastritis, NSAIDs use or a previous history of peptic ulcer disease, though rare, a nasogastric tube previously inserted for any indication should be considered as the cause of viscus perforation.