P1033 - Polypoid Gastric Adenomyoma: A Rare Cause of Bleeding Treated with Polypectomy 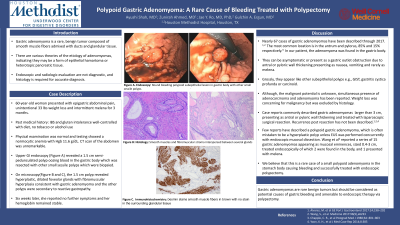 Introduction: Gastric adenomyoma (AM) is a rare, benign tumor composed of smooth muscle fibers admixed with ducts and glandular tissue. Usual presentations include nausea, bloating and gastric outlet obstruction. We describe a rare presentation as a bleeding polyp resolving with excisional polypectomy.

Case Description/Methods: A 60-year-old woman presented with epigastric abdominal pain and melena for 3 months. Physical examination was unrevealing with a normocytic anemia with a hemoglobin of 11.6 g/dL. Abdominal computed tomography was normal. Endoscopy revealed a 1.5 cm semi-pedunculated polyp oozing blood in the gastric body which was resected with multiple small sessile polyps that were biopsied. On microscopy, the 1.5 cm polyp revealed hyperplastic, dilated foveolar glands with fibromuscular hyperplasia consistent with gastric AM and the other polyps were secondary to reactive gastropathy. Six weeks later, her hemoglobin remained stable.

Discussion: Nearly 67 cases of gastric AM have been described in literature until 2017,1,2 typically located in the antrum and pylorus, 85% and 15% respectively.3 Common presentations are gastric outlet obstruction with antral or pyloric wall thickening treated with surgical resection. Uncommonly, gastric AM presents with melena especially in the stomach body.2,4 Wang et al2 reported a series of 15 gastric AMs appearing as mucosal eminences, sized 0.4-3 cm, treated with endoscopy of which 2 were found in the body, and 1 presented with melena. Grossly, they appear similar to other subepithelial polyps eg. GIST, gastritis cystica profunda or carcinoid. Although, the malignant potential is unknown, simultaneous presence of adenocarcinoma and AM has been reported, while recurrence post resection has not.1,2,4 In our patient, mucosal inflammation with oozing suggested the polyp was the source of bleeding that ceased after removal. We believe that this is the first case of a polypoid AM in the stomach body causing bleeding and successfully treated with polypectomy.