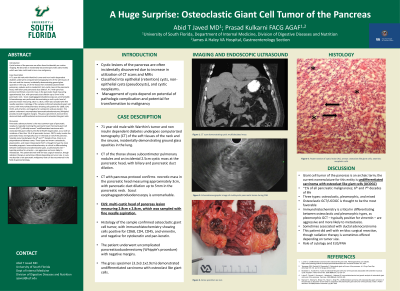 Introduction: Cystic lesions of the pancreas are often found incidentally on routine imaging. We describe an incidentally discovered pancreatic abnormality which was later confirmed to be a rare malignancy.

Discussion: Pancreatic adenocarcinoma is the most common type of pancreatic neoplasm, typically involving the pancreatic head. Pancreatic giant cell tumors (PGCT), officially termed “undifferentiated carcinoma with osteoclast-like giant cells) by the WHO, occur with an incidence of less than 1% of all pancreatic tumors. PGCTs rarely involve the pancreatic head, and typically occur in the body or tail of the pancreas. Typically occurring between the 6th and 7th decade of live, there is no preponderance between sexes. Three types are known: osteoclastic, pleomorphic, and mixed. Osteoclastic PGCT is thought to have the most favorable prognosis. Immunohistochemistry is critical in differentiating between osteoclastic and pleomorphic types, as pleomorphic GCT – typically positive for vimentin – are aggressive and more likely to metastasize. This patient did well with en-bloc surgical resection alone, though radiation therapy is sometimes offered depending on tumor size. In summary, we describe a rare pancreatic malignancy that was incidentally detected, diagnosed by EUS-FNB and successfully managed surgically.