P1228 - An Uncommon Cause of Colocolonic Intussusception 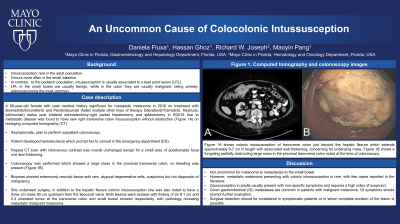 Case Description/Methods: A 68-year-old female with past medical history significant for metastatic melanoma in 2016 on treatment with Binimetinib/Encorafenib and Pembrolizumab (failed multiple other lines of therapy Dabrafenib/Trametinib, Keytruda, Ipilimumab) status post bilateral adrenalectomy-right partial hepatectomy and splenectomy in September 2018 due to metastatic disease who was found to have new right transverse colon intussusception without obstruction on restaging computed tomography (CT) (Figure 1A). Patient denied symptoms at the time. Plan was to perform a colonoscopy to assess for possible metastatic disease versus primary colon malignancy, however the patient developed hematochezia which prompt her to consult in the emergency department. A repeat CT scan with intravenous contrast was overall unchanged except for a small area of questionable focal mid ileal thickening. Colonoscopy was performed which showed a large mass in the proximal transverse colon, no bleeding was present (Figure 1B). Biopsies showed extensively necrotic tissue with rare, atypical degenerative cells, suspicious but not diagnostic of malignancy. She underwent surgery, in addition to the hepatic flexure colonic intussusception she was also noted to have a three cm mass 60 cm upstream from the ileocecal valve. Both lesions were excised with finding of an 8.1 cm and 2.3 ulcerated tumor at the transverse colon and small bowel showed respectively, with pathology revealing metastatic malignant melanoma.

Discussion: It is not uncommon for melanoma to metastasize to the small bowel, however metastatic melanoma presenting with colonic intussusception is rare, with few cases reported in the literature. Intussusception in adults usually present with non-specific symptoms and requires a high index of suspicion. Given gastrointestinal (GI) metastases are common in patients with malignant melanoma, GI symptoms should prompt further evaluation. Surgical resection should be considered in symptomatic patients or in whom complete excision of the lesion is possible.