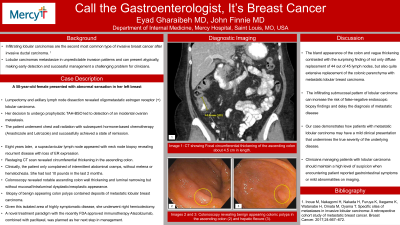 Introduction: Infiltrating lobular carcinomas are the second most common type of invasive breast cancer after invasive ductal carcinoma. Lobular carcinomas metastasize in unpredictable invasion patterns and can present atypically, making early detection and successful management a challenging problem for clinicians. Despite the high incidence of invasive lobular breast carcinoma, few cases of metastasis to the right ascending colon have been reported in the literature.

Discussion: Our case demonstrates how patients with colonic metastasis of lobular carcinoma may have a mild clinical presentation that undermines the true severity of the underlying disease. The bland appearance of the colon and vague thickening contrasted with the surprising finding of not only diffuse replacement of 44 out of 45 lymph nodes, but also quite extensive replacement of the colonic parenchyma with metastatic lobular breast carcinoma. Clinicians managing patients with lobular carcinoma should maintain a high level of suspicion when encountering mild abnormalities on imaging or patient reported gastrointestinal symptoms.