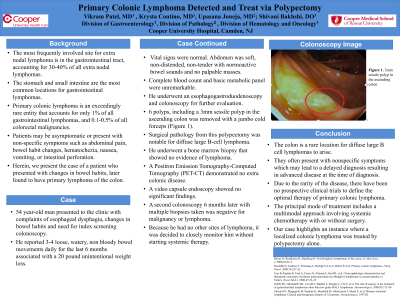 Introduction: The most frequently involved site for extra nodal lymphoma is in the gastrointestinal tract, accounting for 30-40% of all extra nodal lymphomas. The stomach and small intestine are the most common location for gastrointestinal lymphomas. Primary colonic lymphoma is an exceedingly rare entity that accounts for only 1% of all gastrointestinal lymphomas and 0.1%-0.5% of all colorectal malignancies. Patients can be asymptomatic or can present with non-specific symptoms such as abdominal pain, bowel habit changes, hematochezia, nausea, vomiting or even intestinal perforation. Herein, we present the case of a patient who presented with changes in bowel habits, later found to have primary lymphoma of the colon.

Case Description/Methods: A 54 year-old man presented to the clinic with complaints of changes in bowel habits. He reported 3-4 loose, watery, non-bloody bowel movements daily for the last 6 months. He endorsed a 20lb weight loss that he attributed to being infected with COVID-19 earlier in the year. Vital signs were normal. Abdominal examination was normal. Complete blood count and basic metabolic panel were unremarkable. He underwent colonoscopy for further evaluation. This was remarkable for 6 polyps, including a 3mm sessile polyp in the ascending colon that was removed with a jumbo cold forceps (Figure 1). Surgical pathology from this polypectomy was notable for diffuse large B-cell lymphoma. To investigate the extent of his disease, he then underwent a bone marrow biopsy that demonstrated no evidence of lymphoma. A PET-CT scan showed only asymmetric left tonsillar uptake, in which a subsequent biopsy was negative. He also underwent a video capsule endoscopy that had no significant findings. A second colonoscopy 6 months later with multiple biopsies taken was negative for malignancy or lymphoma. Because he had no other sites of lymphoma, it was decided to closely monitor him without starting systemic therapy.

Discussion: The colon is a rare location for diffuse large B cell lymphomas to arise. They often present with nonspecific symptoms which may lead to a delayed diagnosis resulting in advanced disease at time of diagnosis. Due to its rarity, there have been no prospective clinical trials to define the optimal therapy of primary colonic lymphoma. The principal mode of treatment includes a multimodal approach involving systemic chemotherapy with or without surgery. Our case highlights an instance where a localized colonic lymphoma was treated by polypectomy.