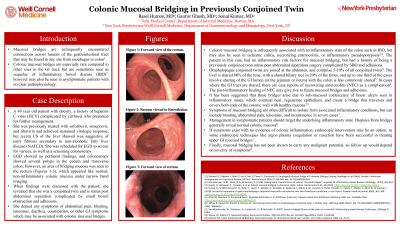 Introduction: Mucosal bridges are infrequently encountered connections across lumens of the gastrointestinal tract that may be found in any site from the esophagus to the colon. Colonic mucosal bridges are especially rare and while they are sometimes seen as sequelae of IBD, they can also be seen in asymptomatic patients with no clear pathophysiology.

Case Description/Methods: We present a 49 year old patient with hepatitis C cirrhosis who was scheduled for an EGD for variceal screening, as well as a screening colonoscopy. EGD showed no abnormalities, but colonoscopy was notable for bridging mucosa seen in the rectum (Figure 1), which appeared as normal, non-inflammatory colonic mucosa under narrow band imaging. When findings were discussed with the patient, she revealed that she was a conjoined twin and is status post abdominal separation complicated by small bowel obstruction and adhesions.

Discussion: Colonic mucosal bridging is infrequently associated with an inflammatory state of the colon such as IBD, but may also be seen in ischemic colitis, necrotizing enterocolitis (NEC), or inflammatory pseudopolyposis. Our patient did not have known inflammatory risk factors for mucosal bridging, but it may be due to her history of being a previously conjoined twin and surgery for abdominal separation. Omphalopagus conjoined twins are joined at the abdomen and most often share the liver. However, up to one third of patients involve sharing of the GI lumen (usually the jejunum or ileum), with the colon less commonly shared. In cases where the GI tract is shared, there are case reports of NEC as a complication. The post-inflammatory healing of NEC may give rise to future mucosal bridges and adhesions. It has been suggested that these bridges arise due to sub-mucosal coalescence of linear ulcers seen in inflammatory states, which eventually heal, regenerate epithelium, and create a bridge that traverses and covers both ends of the colonic wall with healthy mucosa.

Symptoms of mucosal bridging are often difficult to isolate from associated inflammatory conditions, but can include bloating and abdominal pain in severe cases. Management in symptomatic patients should target the underlying inflammatory state. Biopsies from bridges generally reveal normal colonic mucosa and have not been shown to carry malignant potential. If symptoms exist with no evidence of colonic inflammation, endoscopic intervention may be an option, as some endoscopic resection techniques have been successful in treating upper GI mucosal bridges.