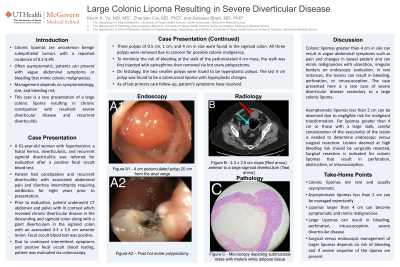 Case Description/Methods: A 61-year-old woman with hypertension, a hiatal hernia, diverticulosis, and recurrent sigmoid diverticulitis was referred for evaluation after a positive fecal occult blood test, constipation, and recurrent diverticulitis for eight years prior to presentation with associated abdominal pain and diarrhea intermittently requiring antibiotics. Prior to evaluation, patient underwent CT abdomen and pelvis with IV contrast which revealed chronic diverticular disease in the descending and sigmoid colon along with a giant diverticulum in the sigmoid colon with an associated 4.3 x 3.5 cm anterior lesion anterior. Fecal occult blood test was positive. Due to continued intermittent symptoms and positive fecal occult blood testing, patient was evaluated via colonoscopy.

Three polyps of 0.5 cm, 1 cm, and 4 cm in size were found in the sigmoid colon. All three polyps were removed due to concern for possible colonic malignancy. To minimize the risk of bleeding at the stalk of the pedunculated 4 cm mass, the stalk was first injected with epinephrine then removed via hot snare polypectomy. On histology, the two smaller polyps were found to be hyperplastic polyps. The last 4 cm polyp was found to be a submucosal lipoma with hyperplastic changes. As of last primary care follow-up, patient was asymptomatic.

Discussion: Colonic lipomas greater than 4 cm in size can result in vague abdominal symptoms such as pain and changes in bowel pattern and can mimic malignancies with ulceration, irregular borders on endoscopic evaluation. In rare instances, the lesions can result in bleeding, perforation, or intussusception. Asymptomatic lipomas less than 2 cm can be observed due to negligible risk for malignant transformation. For lipomas greater than 4 cm or those with a large stalk, careful consideration of the vascularity of the lesion is needed to determine endoscopic versus surgical resection. Lesions deemed at high bleeding risk should be surgically resected. Surgical resection is indicated for colonic lipomas that result in perforation, obstruction, or intussusception.