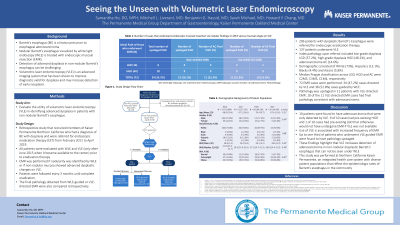 Methods: This retrospective study recruited members of Kaiser Permanente Northern California who had a diagnosis of BE with dysplasia and were referred for endoscopic eradication therapy (EET) from February 2011 to April 2019. VLE was made available to the center starting in June 2015. All consecutive patients were evaluated with WLE and VLE prior to eradication therapy by one of two endoscopists who are trained in using VLE. EMR was performed if nodularity was identified by WLE or if non-nodular mucosa showed advanced dysplastic changes on VLE. Patients were followed every 3 months until complete eradication. The final pathology obtained from WLE-guided or VLE-directed EMR were also compared retrospectively.

Discussion: In our study, we found that volumetric laser endomicroscopy (VLE) allowed for the detection of non-nodular adenocarcinoma in 10 of 72 (13.9%) total patients with dysplastic Barrett’s esophagus who underwent EMR and about one quarter (22.5%) of patients with pre-existing high grade dysplasia. This finding highlights that a substantial minority of patients with dysplastic Barrett’s esophagus harbor foci of adenocarcinoma not readily visible with standard endoscopy.

Table: Comparison of Cases with Upstaged Pathology and Final Pathology of Adenocarcinoma based on WLE-guided or VLE-directed EMR;