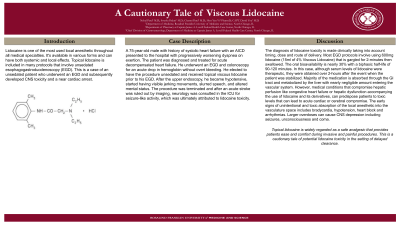 Introduction: Lidocaine is one of the most used local anesthetic throughout all medical specialties.It's available in various forms and can have both systemic and local effects.Topical lidocaine is included in many protocols that involve unsedated esophagogastroduodenoscopy (EGD).This is a case of an unsedated patient who underwent an EGD and subsequently developed CNS toxicity and a near cardiac arrest.

Case Description/Methods: A 75-year-old male with history of systolic heart failure with an AICD presented to the hospital with progressively worsening dyspnea on exertion.The patient was diagnosed and treated for acute decompensated heart failure.He underwent an EGD and colonoscopy for an acute drop in hemoglobin without overt bleeding.He elected to have the procedure unsedated and received topical viscous lidocaine prior to his EGD.After the upper endoscopy, he became hypotensive, started having visible jerking movements, slurred speech, and altered mental status.The procedure was terminated and after an acute stroke was ruled out by imaging, neurology was consulted in the ICU for seizure-like activity, which was ultimately attributed to lidocaine toxicity.

Discussion: The diagnosis of lidocaine toxicity is made clinically taking into account timing, dose and route of delivery. Most EGD protocols involve using 600mg lidocaine (15ml of 4% Viscous Lidocaine) that is gargled for 2-minutes then swallowed.The oral bioavailability is nearly 30% with a biphasic half-life of 90-120 minutes.In this case, although serum levels of lidocaine were therapeutic, they were obtained over 2-hours after the event when the patient was stabilized.Majority of the medication is absorbed through the GI tract and metabolized by the liver with nearly negligible amount entering the vascular system.However, medical conditions that compromise hepatic perfusion like congestive heart failure or hepatic dysfunction accompanying the use of lidocaine and its derivatives, can predispose patients to toxic levels that can lead to acute cardiac or cerebral compromise.The early signs of unintentional and toxic absorption of the local anesthetic into the vasculature space includes bradycardia, hypotension, heart block and arrhythmias.Larger overdoses can cause CNS depression including seizures, unconsciousness and coma.
Topical lidocaine is widely regarded as a safe analgesic that provides patients ease and comfort during invasive and painful procedures.This is a cautionary tale of potential lidocaine toxicity in the setting of delayed clearance.