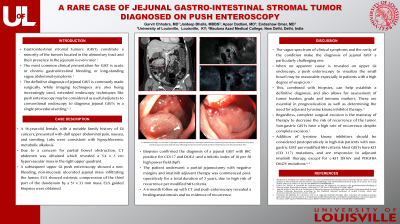 Introduction: Gastrointestinal stromal tumors (GIST) constitute a minority of the tumors located in the alimentary tract and their presence in the jejunum is even rarer. The most common clinical presentation for GIST is acute or chronic gastrointestinal bleeding, or long-standing vague abdominal symptoms. The definitive diagnosis of jejunal GIST is commonly made surgically. While imaging techniques are also being increasingly used, extended endoscopy techniques like push enteroscopy may be considered as useful adjuncts to conventional endoscopy to diagnose jejunal GISTs in a single procedural setting.

Case Description/Methods: A 56-year-old female, with a notable family history of GI cancers, presented with dull upper abdominal pain, nausea, and vomiting, suggestive of partial small bowel obstruction. CT of the abdomen revealed a 5.4 x 5 cm hypervascular mass in the right upper quadrant. A subsequent upper GI push enteroscopy showed a non-bleeding, non-mucosal, ulcerated jejunal mass infiltrating the lumen. EUS showed extrinsic compression of the third part of the duodenum by a 51 x 33 mm mass. Biopsies confirmed the diagnosis of a jejunal GIST with IHC positive for CD117 and DOG1; and a mitotic index of 10 per 50 hpf. The patient underwent a partial jejunectomy with negative margins and imatinib adjuvant therapy was commenced post-operatively due to the high risk of recurrence per modified NIH criteria. A 6-month follow-up with CT and push enteroscopy revealed a healing anastomosis and no evidence of recurrence.

Discussion: The vague spectrum of symptoms and the rarity of the condition make the diagnosis of jejunal GIST challenging. When no apparent cause is revealed on upper GI endoscopy, a push enteroscopy to visualize the small bowel may be reasonable especially in patients with a high degree of suspicion. This, combined with biopsies, can help establish a definitive diagnosis, and also allows for assessment of tumor burden, grade, and immune markers. These are essential in prognostication as well as determining the need for adjuvant tyrosine kinase inhibitor therapy. Regardless, complete surgical excision is the mainstay of therapy. Non-gastric GISTs have a high rate of recurrence despite complete excision. The addition of tyrosine kinase inhibitors should be considered postoperatively in high-risk patients with non-gastric GIST per modified NIH criteria. Most GISTs have KIT (CD 117) mutations, and are responsive to adjuvant imatinib therapy, except for c-KIT D816V and PDGFRA D842V mutations.