P1488 - A Knot in My Stomach: A Rare Cause of a Malfunctioning PEG-J Tube 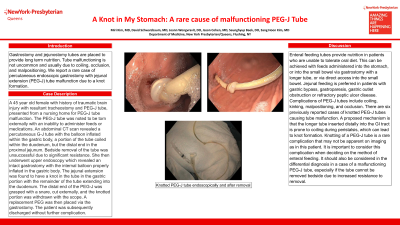 Introduction: Gastrostomy and jejunostomy tubes are placed to provide long term nutrition. Tube malfunctioning is not uncommon and usually due to coiling, occlusion, and malpositioning. We report a rare case of percutaneous endoscopic gastrostomy with jejunal extension (PEG-J) tube malfunction due to a knot formation.

Case Description/Methods: A 45 year old female with history of traumatic brain injury with resultant tracheostomy and PEG-J tube, presented from a nursing home for PEG-J tube malfunction. The PEG-J tube was noted to be torn externally with an inability to administer feeds or medications. An abdominal CT scan revealed a percutaneous G-J tube with the balloon inflated within the gastric body, a portion of the tube coiled within the duodenum, but the distal end in the proximal jejunum. Bedside removal of the tube was unsuccessful due to significant resistance. She then underwent upper endoscopy which revealed an intact gastrostomy with the internal balloon properly inflated in the gastric body. The jejunal extension was found to have a knot in the tube in the gastric portion with the remainder of the tube extending into the duodenum. The distal end of the PEG-J was grasped with a snare, cut externally, and the knotted portion was withdrawn with the scope. A replacement PEG was then placed via the gastrostomy. The patient was subsequently discharged without further complication.

Discussion: Enteral feeding tubes provide nutrition in patients who are unable to tolerate oral diet. This can be achieved with feeds administered into the stomach, or into the small bowel via gastrostomy with a longer tube, or via direct access into the small bowel. Jejunal feeding is preferred in patients with gastric bypass, gastroparesis, gastric outlet obstruction or refractory peptic ulcer disease. Complications of PEG-J tubes include coiling, kinking, malpositioning, and occlusion. There are six previously reported cases of knotted PEG-J tubes causing tube malfunction. A proposed mechanism is that the longer tube inserted distally into the GI tract is prone to coiling during peristalsis, which can lead to knot formation. Knotting of a PEG-J tube is a rare complication that may not be apparent on imaging as in this patient. It is important to consider this complication when deciding on the method of enteral feeding. It should also be considered in the differential diagnosis in a case of a malfunctioning PEG-J tube, especially if the tube cannot be removed bedside due to increased resistance to removal.