P1515 - Comparative Analysis of Pre-endoscopy Intravenous Erythromycin versus Nasogastric Lavage and Combination of Both in Acute Upper GI Bleeding: A Systemic Review and Meta-Analysis 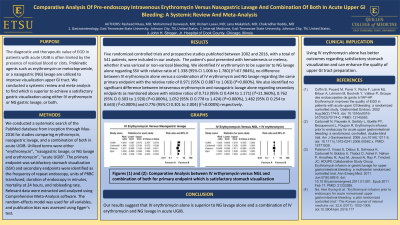 Introduction: The diagnostic and therapeutic value of EGD in patients with acute UGIB is often limited by the presence of residual blood or clots. Prokinetic agents such as erythromycin or metoclopramide, or a nasogastric (NG) lavage are utilized to improve visualization upper GI tract. We conducted a systemic review and meta-analysis to find which is superior to achieve a satisfactory gastric visualization using either IV erythromycin or NG gastric lavage, or both

Methods: We conducted a systematic search of the PubMed database from inception through May-2016 for studies comparing erythromycin, nasogastric lavage, and a combination of both in acute UGIB. Utilized terms were either “erythromycin”, “nasogastric lavage, or NG lavage and erythromycin”, “acute UGIB”. The primary endpoint was satisfactory stomach visualization (SSV) and secondary endpoints were identified as the frequency of repeat endoscopy, units of PRBC transfused, duration of endoscopy in minutes, mortality at 24 hours, and rebleeding rate. Relevant data were extracted and analyzed using Comprehensive Meta-Analysis software. The random-effects model was used for all variables, and publication bias was assessed using Egger’s test