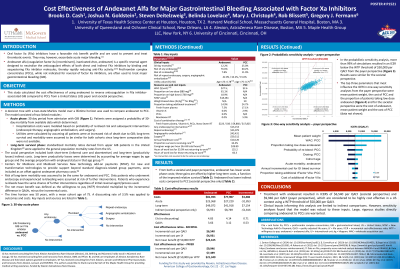 Methods: A decision tree with a two-state Markov model over a lifetime horizon was used to compare andexanet to prothrombin complex concentrate (PCC). The model consisted of two linked modules: an acute phase of 30 days from admission with GIB and a long-term lifetime survival phase. Patients in the acute phase were assigned a probability of 30-day mortality from available data which determined their entry into the long-term phase. Hospitalization costs were modeled by assigning probabilities based on re-bleed risk and subsequent interventions (endoscopic therapy, angiographic embolization, and surgery). Utilities were calculated by assuming all patients were at increased risk of death due to GIB; long-term survival and morbidity were assumed to be similar for the reversal strategies since long-term comparative data were not available. Discounting was applied to outcome and costs. The societal perspective included indirect costs encompassing caregiver support and productivity losses. New technology add-on payments (NTAP), applied by Centers for Medicare and Medicaid Services to new and transformative technologies to provide support beyond standard diagnosis related group payments, were included as an offset against andexanet pharmacy costs.

Results: In comparison to PCC, andexanet incremental total costs (including drug, hospitalization, and long-term) were $5,301 (payer) and $3,486 (societal); incremental quality-adjusted life-years (QALYs) for both perspectives were 0.53. This resulted in incremental cost-effectiveness ratios (ICERs) of $9,946/QALY (payer) and $6,540/QALY (societal). Findings were robust to probabilistic and deterministic sensitivity analysis, with the most influential parameters being drug costs, mortality rates, and age.

Discussion: Our analysis suggests that compared to PCC, andexanet can be considered cost effective in the treatment of FXa inhibitor related major GIB at a willingness to pay threshold of $50,000/QALY gained from both US payer and societal perspectives.