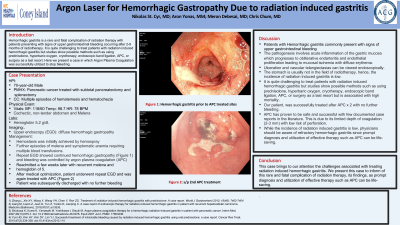 Introduction: We present a 70-year-old male with a history of recurrent pancreatic cancer undergoing palliative chemoradiotherapy who was admitted with hematemesis and hematochezia requiring multiple blood transfusions. He was diagnosed with hemorrhagic gastritis, likely radiation induced and treated with argon plasma coagulation.

Case Description/Methods: 70 year old male with history of pancreatic cancer treated with subtotal pancreatectomy and splenectomy presented with hematemesis and hematochezia. He was being managed for recurrence of pancreatic cancer by palliative chemoradiotherapy. Upon presentation, was found to have severe anemia and underwent emergent EGD revealing diffuse hemorrhagic gastropathy. Hemostasis was initially achieved by hemospray. However, he had further episodes of melena and symptomatic anemia requiring multiple blood transfusions. Repeat EGD showed continued hemorrhagic gastropathy (figure 1A) and bleeding was controlled by argon plasma coagulation (APC)(Figure 1B). He was readmitted 2 weeks later with recurrent melena and hemoglobin of 5. After medical optimization, EGD was repeated and patient discharged with no further bleeding after 2nd APC (Figure 1D).

Discussion: Hemorrhagic gastritis is a rare and fatal complication of radiation therapy with patients presenting with signs of upper gastrointestinal bleeding usually occurring after 2-9 months of radiotherapy (1)The pathogenesis involves acute inflammation of the gastric mucosa which progresses to obliterative endarteritis and endothelial proliferation leading to mucosal ischemia with diffuse erythema, ulceration and vascular telangiectasias which can be viewed endoscopically.(2)The stomach is usually not in the field of radiotherapy, hence the incidence of radiation induced gastritis is low. It is quite challenging to treat patients with radiation induced hemorrhagic gastritis but studies show possible methods such as using prednisolone, hyperbaric oxygen, cryotherapy, endoscopic band ligation, APC, or surgery as a last resort but is associated with high mortality.(1,2,4) Our patient was successfully treated after APC x 2 with no further bleeding. APC is safe and successful with few documented case reports in the literature. This is due to its limited depth of coagulation (2-3 mm) with low risk of perforation. (3) While the incidence of radiation induced gastritis is low, physicians should be aware of refractory hemorrhagic gastritis since prompt diagnosis and utilization of effective therapy such as APC can be life-saving 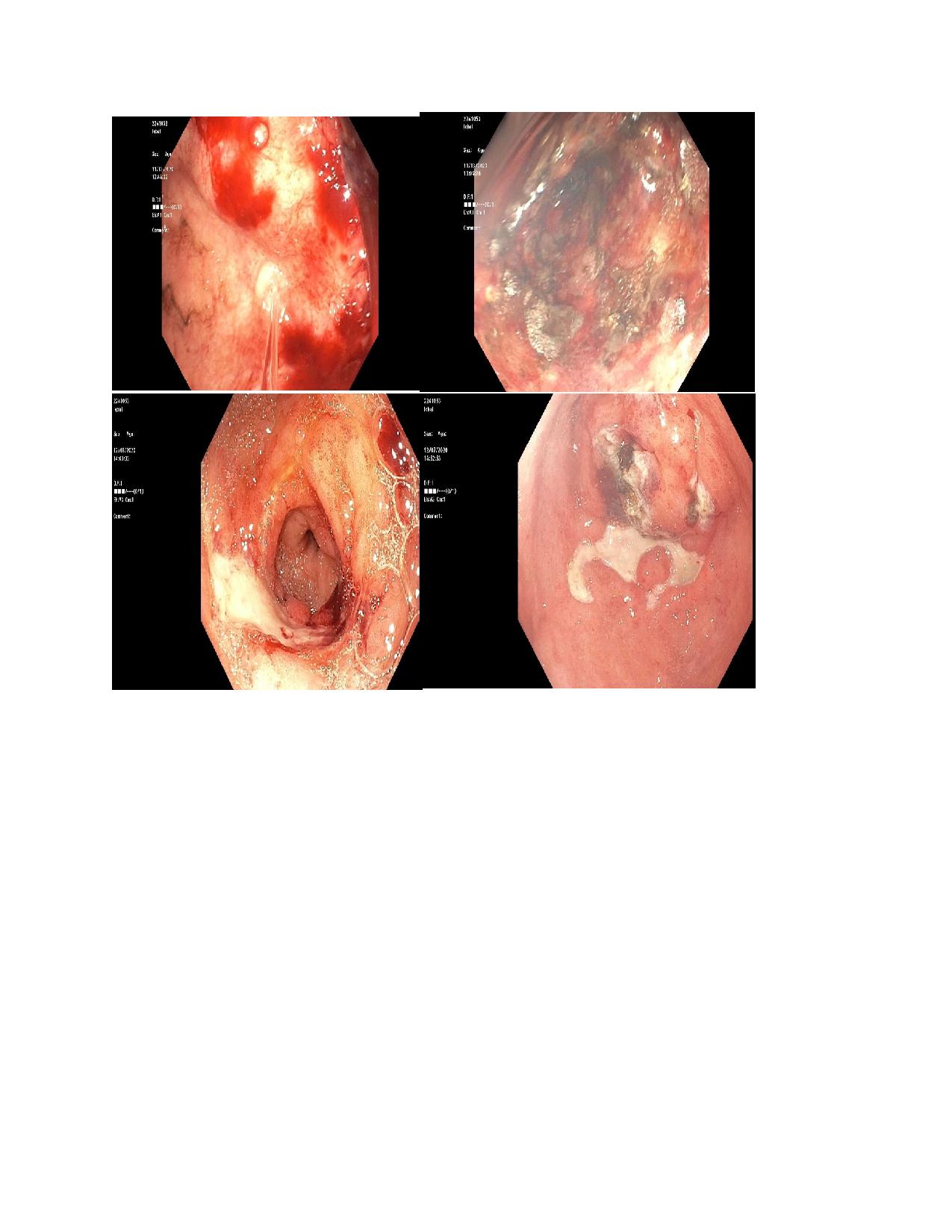