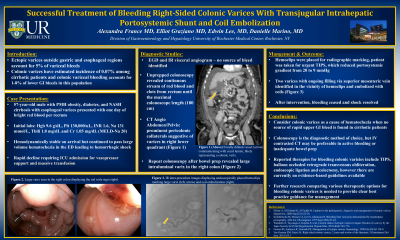 Introduction: Ectopic varices are portosystemic collateral vessels outside the esophageal and gastric regions and account for 5% of variceal bleeding. Among ectopic varices, those in the colon are the rarest and are scarcely suspected as the cause of massive gastrointestinal bleeding. Due to their rarity, there is no standard of care established for the management of colonic variceal bleeding. We report a case of acute lower gastrointestinal bleeding due to colonic varices that was treated with TIPS and coil embolization.

Case Description/Methods: A 57-year-old male with NASH cirrhosis presented with large volume hematochezia. Despite volume resuscitation, he remained hemodynamically unstable and was admitted to the ICU, where vasopressors were initiated. He underwent esophagogastroduodenoscopy followed by visceral angiography, neither of which revealed a source of bleeding. Colonoscopy was urgently performed without bowel preparation, and a continuous stream of bright red blood was noted until the colonoscope reached its maximum length; no lesion could be identified. CT angiogram of the abdomen and pelvis showed multiple prominent pericolonic collaterals in the right lower quadrant and identified a focally dilated vein communicating with the cecal lumen.


Repeat colonoscopy with bowel preparation showed an intraluminal varix in the right colon with red wale sign (Figure 1). Adjacent hemoclips were placed for radiographic marking, and the patient was taken for urgent TIPS to reduce the portosystemic gradient. Two colonic varices with active filling via the superior mesenteric vein were identified and embolized with coils. After the intervention, the patient had no further hematochezia and his shock resolved. 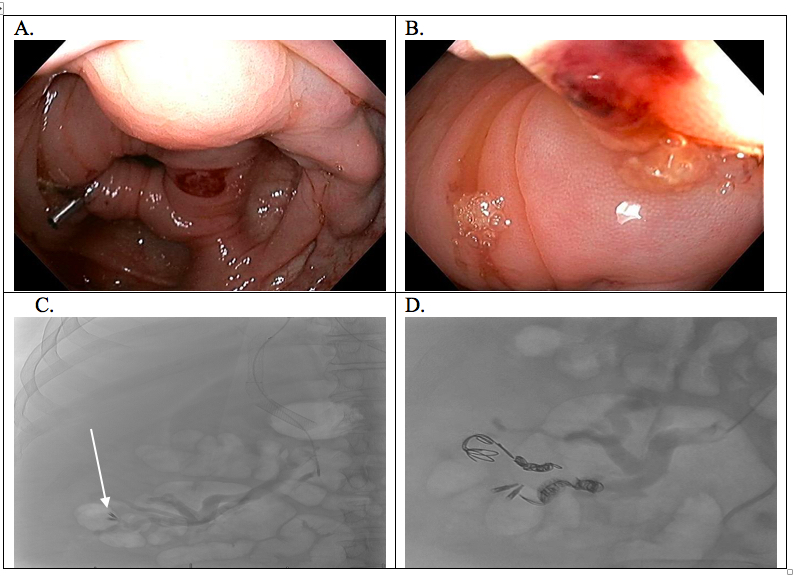