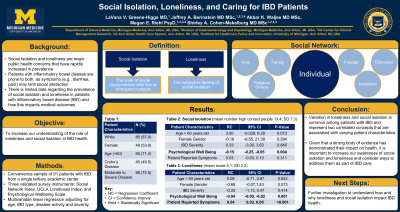 Methods: In April and May 2021, we recruited patients with IBD managed at a single academic center. Patients completed a survey composed of three validated instruments: UCLA loneliness index, Psychological Wellbeing Scale, and Social Network Index, which examines social isolation by high contact connections that a patient interacts with at least every 2 weeks. We assessed the variation in social isolation and loneliness using multivariable linear regression.

Results: We enrolled 91 patients. A majority were younger than 60 years (71.4%), female (53.9%), White (87.9%), with either ulcerative colitis (47.3%) or Crohn’s disease (49.5%), and moderate-to-severe disease (72.5%). The mean loneliness score was 5.1 (SD 2.2), on a 1-9 scale where a higher score suggests increased loneliness. Patients reported a mean of 13.4 (SD 7.3) high contact social connections (Figure 1). The most common connections were family (55.0%) and work colleagues (45.1%). A strong correlation existed between social isolation and loneliness (r=0.45; p < 0.001). Loneliness was associated with more patient reported symptoms and lower psychological wellbeing. There was a trend towards an association with female gender, as well. Social isolation was associated with lower psychological wellbeing, and age greater than 60 years was associated with a trend towards significance (Table 1).

Discussion: Variation in loneliness and social isolation is common among patients with IBD, and represent two correlated concepts that are associated with varying patient characteristics. Given that a strong body of evidence has demonstrated their impact on health, it is important to increase our awareness of social isolation and loneliness, and consider ways to address them as part of IBD care.