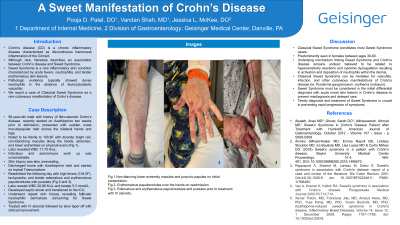 Case Description/Methods: A 56-year-old male presented with sudden onset rash across the bilateral hands and legs. Pertinent past medical history was significant for fibrostenotic Crohn’s disease, started on Azathioprine two weeks prior to admission. On presentation, he was febrile to 100.8 F. Physical examination revealed discrete bright red, non-blanching macules along the hands, abdomen, and lower extremities. Laboratory work up showed a leukocytosis of 17.70 K/uL. Infectious and autoimmune workup were unremarkable. Skin biopsy was unrevealing. He was discharged home with topical Triamcinolone and off Azathioprine. Patient returned the following day febrile (104.5 F) and tachycardic with worsening tender edematous and erythematous papulonodules and pustules. Laboratory workup revealed a leukocytosis of 20.86 K/uL and lactate 5.3 mmol/L. He was transferred to the ICU for septic shock without identifiable infectious source. A repeat skin biopsy was performed revealing follicular neutrophilic dermatosis consistent with Sweet Syndrome. He was treated with IV steroids with clinical improvement followed by a slow taper on discharge home.

Discussion: CSS constitutes most Sweet Syndrome cases, occurring predominantly in females between ages 30-60. While the underlying mechanism linking SS and CD is poorly understood, it is thought to be related to hypersensitivity reactions and cytokine dysregulation leading to activation and deposition of neutrophils within the dermis. CSS can be mistaken for vasculitis, infection, and other cutaneous manifestations of CD, such as pyoderma gangrenosum and erythema nodosum resulting in delayed diagnosis and rapid progression of symptoms. As our case demonstrates, CSS is an uncommon manifestation of CD that must be considered in the initial differential diagnosis in CD patients with acute onset skin lesions in order to prevent misdiagnosis and delayed care.